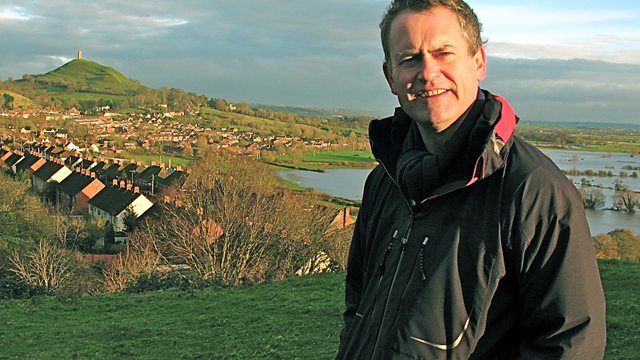 Ifor ap Glyn visits trees and mountains as a way of understanding the journey Britain undertook from the old Pagan religion to Christianity.

Presenter and Welsh poet Ifor ap Glyn explores the wealth of Britain's extraordinary holy places on a pilgrimage that spans almost 2,000 years of history. Travelling across the breadth of the UK, Ifor uncovers the stories and rich history behind many of our most famous sites, explaining the myths and legends of some of Britain's most sacred places.

Ifor visits trees and mountains as a way of understanding the journey Britain undertook from the old Pagan religion to Christianity. His journey starts in Glastonbury, site of the famous tor and the Thorns, the most holy trees in the country. He discovers how even now these symbols are causing friction and discord.

His journey continues at Knowlton in Dorset, a place where a Norman church has been built right in the centre of an earthen henge. There he meets a druid who explains how Pagan sites were often overwritten in this way by the new Christian religion before they both discover that, at least here, earth magic seems to be making a comeback.

Ifor visits a bleeding yew tree that has divided opinion for 600 years and, in Snowdonia, a mountain where the devil is said to have gone toe to toe with an early Christian missionary. He travels to a rocky Cornish crag where St Michael himself is said to reside before finishing his journey at Pendle Hill, inspiration behind the most stripped down and anti-Pagan religious denomination of all time. But even here, did Christianity really manage to break free of Paganism?

See all episodes from Pagans and Pilgrims: Britain's Holiest Places