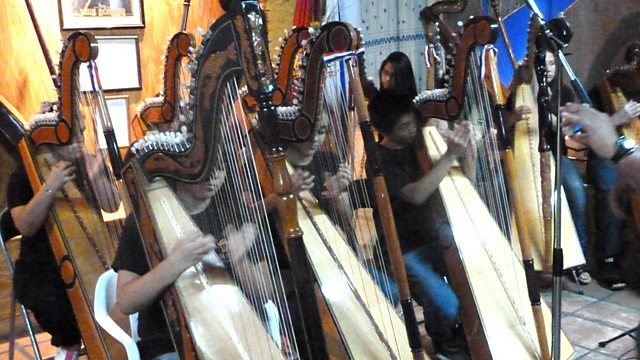 World Routes The Baroque and Beyond

Throughout March, as part of Baroque Spring, Lucy Duran visits Paraguay and Bolivia. This week in Paraguay, she meets one of the world's greatest classical guitarists, Berta Rojas. Plus she visits the Arpa Roga - or Harp School of Asuncion - where the famous Pedersen family of harpists and musicians teach children to play the exquisite national instrument of Paraguay. Producer James Parkin.

World Routes gets to the heart of Latin American Baroque in two of the continent's most musical nations. The programme makes exclusive recordings of music and musicians that date from the Baroque period, as well as other traditions that date from before or after the 16th and 17th Centuries.
In Paraguay, the focus is the harp which has become the national instrument. Duran hears it in its modern form, visits a harp school where children get off the streets and learn music, and also records one of the only true replicas of a Baroque harp on the whole continent. She savours the unique atmosphere of Misiones where she stands amongst the ruins listening to young students recreating the choral sounds of the banished Jesuits. Plus there's country music recorded on a working ranch and a session with one of the world's greatest female guitarists, Berta Rojas.
In La Paz, Bolivia, Duran records the traditional panpipes of Lake Titicaca at around 4000m above sea level. Further down the mountain, there's the Andean sounds of Bolivia's most celebrated group: Los Masis. They're based very close to the spot in Sucre where Simon Boliva declared independence for the continent. And there's music from Amazonian Indians, and Baroque music written by indigenous composers in the 17th Century: performed these days by a youth orchestra in the exquisitely renovated churches of San Jose de Chiquitos.

Episode 3—The Baroque and Beyond