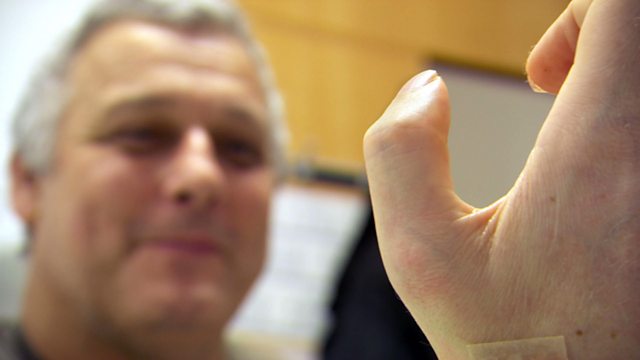 Documentary telling the story of Britain's first hand transplant, carried out by surgeons at Leeds Infirmary on Boxing Day 2012, and the candidates who applied for the procedure.

Documentary telling the story of Britain's first hand transplant, carried out by surgeons at Leeds Infirmary on Boxing Day night 2012, from the moment Professor Simon Kay and his team decided to go ahead to the moment the patient was able to move the transplanted hand.

During that time, candidates came forward from all over the UK and beyond - including a hairdresser, an IT consultant, a former pub landlord, a DJ and a retired housewife - all of whom had lost the use of at least one of their hands.

But before they could go ahead, the doctors had to be sure they were physically and psychologically prepared. Some decided that the risks - including the potentially life-shortening drugs that would need to be taken for the rest of their life - weren't worthwhile. Others decided that the misery of living without a hand outweighed everything else.

This thought-provoking film is with them as they make their decisions - and with the surgeons as the patient who comes through the process is finally taken into the operating theatre.