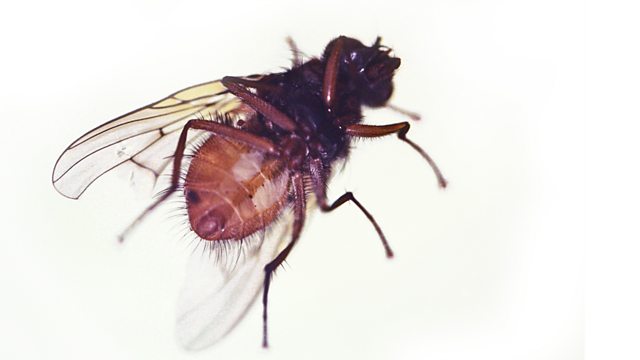 Entomologist Erica McAlister explores the world of insects - which make up 80% of the species on earth - and their superpowers. From March 2013.

They make up a mighty 80% of the species on earth, and at any time there are ten QUINTILLION of them living.

Meet the six-legged rulers of the world: INSECTS

Entomologist Erica McAlister is known as Fly Girl to her friends. As Curator of Flies at the Natural History Museum, she knows what remarkable, strange, and diverse animals insects are. But for most of us, insects are pests - something we swot, or repel, or catch in a jar and hastily eject from the house. In this three part series, Erica will take listeners on an adventure in insect-world. It's our world, but not as we know it.

Insect world is populated by beings with superpowers - an amazing sense of smell, lightning reflexes, the ability to fly at dizzying speed or walk on the ceiling. And these superpowers have implications for us humans - in medicine, defence, food, art and architecture. They can help us to live more healthily, more safely, more sustainably.

See all episodes from Who's the Pest?

The Oxford Silk Group recorded a short video of spider silk reeling.  You can see this video via an article published by guardian.co.uk, Saturday 12th Jan 2013.

Note there is no sound on the clip.  Video clip is © Oxford Silk Group/University of Oxford