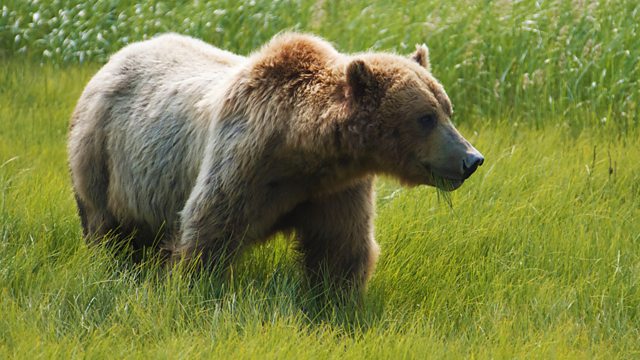 Johnny Kingdom and the Bears of Alaska

Johnny Kingdom takes the trip of a lifetime to Kodiak Island in Alaska in search of brown bears and to get footage of them fishing for sockeye salmon in the remote rivers.

Johnny Kingdom, the wild man of Exmoor, is back and going further than he's ever been before - the trip of a lifetime to Kodiak Island in Alaska in search of brown bears.

As a lad, amateur wildlife filmmaker Johnny would poach salmon from the rivers on Exmoor with his bare hands, but his lifelong ambition has been to see how the real experts - brown bears - do it, as they fish for sockeye salmon in the remote rivers of Kodiak Island off the southwest coast of Alaska.

It is also the biggest challenge he has faced as an amateur cameraman. In characteristic style, Johnny finds himself struggling to keep his camera still without a tripod and because his hands are shaking so much when faced with a 'hooge' bear less than 30 metres away.

The other challenge he faces, which he cannot control, is the weather. In the summer, although the snow has melted this part of Alaska is plagued by heavy mists and fog, which makes the journey by seaplane to the remote areas where the bears live even harder to achieve.

Fortunately Johnny is able to take advantage of being grounded and heads out on a boat into the rich waters around Kodiak Island to film humpback whales, tufted puffins and an enchantingly close encounter with sea otters.

But it's the bears he's come for and Johnny finally gets the shots he wanted - bears catching salmon. He can hardly believe it.

This is Johnny Kingdom at his best - infectiously enthusiastic, madly exuberant and never less than hugely enjoyable.