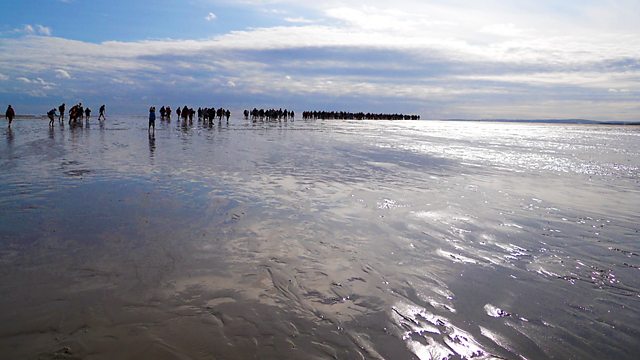 4 Extra Debut. Poet Paul Farley walks across the famously treacherous sands of Morecambe Bay and charts its history. From 2012.

In a walk across the dangerous sands of Morecambe Bay, poet Paul Farley collapses time and journeys into the shifting geography of this most indeterminate of English places.

Morecambe Bay is a vast coming together of five rivers and cuts into the coastline of NW England like a miniature, fractal Irish Sea. Seen from the Lancashire shoreline, however, it seems vast, a silvery sheet of mudflats and saltwater. But the Bay is famously treacherous - everybody knows how the incoming tide can travel 'faster than a horse can run', and the quicksands here have claimed many lives.

It is possible to cross the Bay on foot, at low tide, if it allows you. Weather systems here are very volatile and Paul is thrown off course a number of times by the Bay's tempestuous nature. He finally strikes out with the indispensable help of the Sand Pilot Cedric Robinson. Cedric is a locally appointed Queen's Guide to the Sands, a role that has existed here for centuries. He has been guiding people across the sands - Moses-like with a staff - since 1963. Monks used to guide travellers across the bay at low water. Today Cedric leads groups of several hundred modern pilgrims, raising money for charity.

Accompanied by an adventurer, a marine biologist and a literary geographer Paul ventures out and attempts to chart the history of this uncertain landscape: it's geology and ecology, its religious associations and its human tragedies. This modern day poet decyphers the same sands that struck fear into Romantic poet William Wordsworth who crossed them 200 years ago.