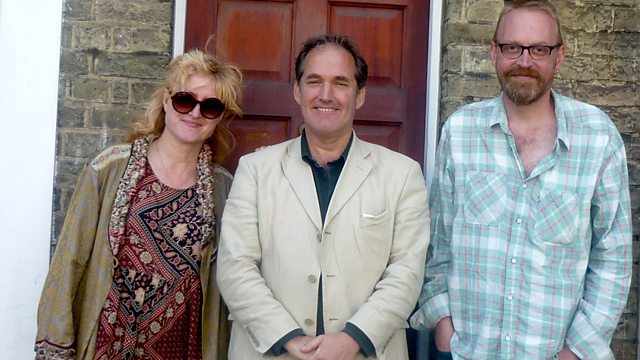 Songwriter Boo Hewerdine returns to Cambridge with singer Eddi Reader to discuss and perform Patience of Angels. From February 2013.

Twenty years ago, on a busy road in an otherwise leafy district of Cambridge, songwriter Boo Hewerdine was looking out of his top floor flat and saw a woman on a bus travel by - and from these rather inauspicious beginnings the song Patience of Angels took shape. It later became a hit in 1994 for singer Eddi Reader who'd had previous chart success with the group Fairground Attraction.

In this episode of Lyrical Journey, Jonathan Maitland visits Cambridge to meet Boo and Eddi and, as they prepare for a charity concert, a stone's throw from Boo's old flat, they discuss the origin of the song and what it means to each of them.

As Maitland explores places in Cambridge which influenced the song, he also examines the University town's association with Angels.

The line from 'Patience of Angels': 'there's a door in a wall in a house in a street' could easily have fallen out of the pages of a CS Lewis story; and Lewis expert Dr Michael Ward explains to Maitland the author's fascination with angels inherent in his work.

The journey concludes in the apt surroundings of St Luke's Church in Cambridge, where a packed crowd watch Eddi and Boo perform a unique version of the song especially recorded for the programme.