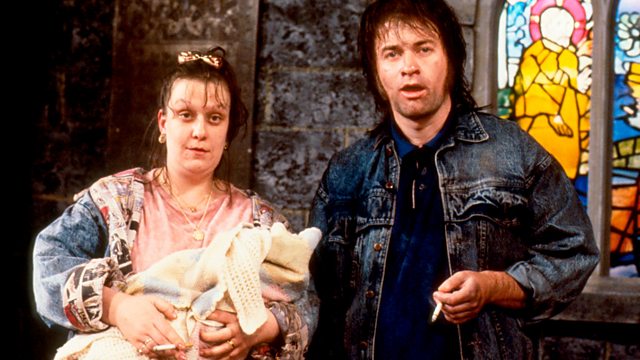 Writer Oliver Burkeman wanders through the archives thinking about the pros and cons of idleness. Helping with his enquiries are Bagpuss, Reagan and The Slobs, among others.

The writer, Oliver Burkeman, wanders through the archives, thinking about the pros and cons of idleness.
In these goal obsessed, triple-dip recession conscious days, the merest hint of idleness can send politicians and headline writers into a state of near apoplexy. Front-benchers from all political parties seem to be tripping over themselves in a bid to establish the supremacy of their moral devotion to the 'hard working families' and upstanding citizens of 'alarm clock Britain'.
Oliver Burkeman steps back from the fray to unravel the complications of idleness and even discover some of its merits. As a non-idler who confesses to that feeling of smugness at having achieved tasks before breakfast time, Oliver nonetheless questions whether our target driven culture can ever bring any sense of contentment or happiness. The crux of the conflict seems to be that although idleness may be the dream, we spend most of our lives actively rejecting it.
And so we admire, despise and envy the idler, all at once. Oliver consults a diverse range of characters from the archive to untangle some of the complications. These include Bagpuss, Rab C Nesbitt, Tony Hancock, Waynetta Slob and Ronald Reagan, who all help Oliver examine idleness and its relation to childhood, creativity, boredom, social class and subversion.
There are also wonderful insights from 'real people'. There's the testimony of a schoolboy from 1960s Birmingham, dreaming of the island life. Unbothered by the noise of everyday life (including The Queen chasing him for rates) he is able to compose opera by seeking inspiration from nature. A gloriously grand Colonel's wife flagrantly tells of her life of luxury, being fed and watered by her husband with bath time Brandy and Ginger Ales, iced coffees, only occasionally talking to the children through the intercom if she is particularly bored. Then there's the fisherman who believes that idleness and death go hand in hand and that the introduction of the Welfare State could only turn him into a sluggard. And there's the moving testimony of a former miner, who began work in the pits during his school holidays in 1925, and then paradoxically found the greatest moments of happiness and freedom during the months of idleness brought about by the General Strike.
Oliver also meets with the founder of The Idler magazine, Tom Hodgkinson, for a whistle stop history of idleness and the philosophical debate, to discover how the work ethic became so inculcated. Tom argues that at least part of the reason for this is because, by their very nature, pro-idlers are bound to be less zealous in spreading the idleness word.
There's also an appealing aside, when Oliver observes that in the right person, idleness and that special insouciance that can go with it, is simply 'cool'.
With fantastic music, enquiry, and laughter, join Oliver Burkeman, Embracing Idleness.