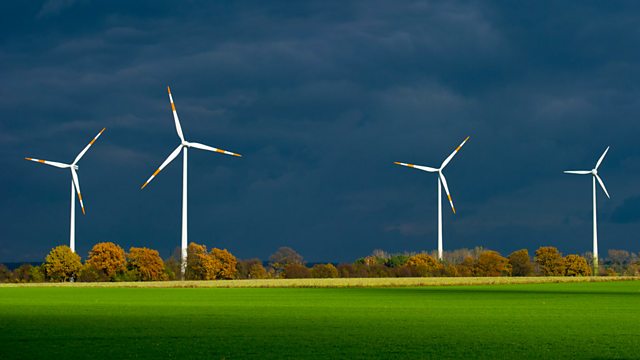 Germany has given up nuclear energy and plans to do away with coal. Can Europe's industrial powerhouse really thrive on power from the wind and the sun? Tom Heap investigates.

It's an environmental experiment on an unprecedented scale. Germany's political parties have agreed to close the country's nuclear power stations and slash its use of coal, oil and gas. But can the industrial powerhouse of Europe really continue to churn out the BMWs and Mercedes on a meagre diet of wind and solar energy?

In the first of a new series of 'Costing the Earth' Tom Heap travels to Berlin to meet the politicians of right and left who share a vision for a green Germany and the industrialists who fear that blind optimism has replaced logic at the heart of government.

Tom visits Feldheim, a tiny village that produces enough wind power to run a city and talks to the activists who plan to take over the entire electricity grid of Berlin and run the capital on alternative energy. Their enthusiasm is infectious but could the reality be power cuts and the departure of the industrial giants to the US and the Far East?

The stakes are high. If the plan they've christened the Energiewende, or energy transformation, succeeds, then Germany will have created a low-carbon model for the UK and the rest of the industrialised world. If it fails Germany could lose its place as an economic superpower.

Tom visits the village of Feldheim, a rural energy powerhouse

The German Federation of Industry