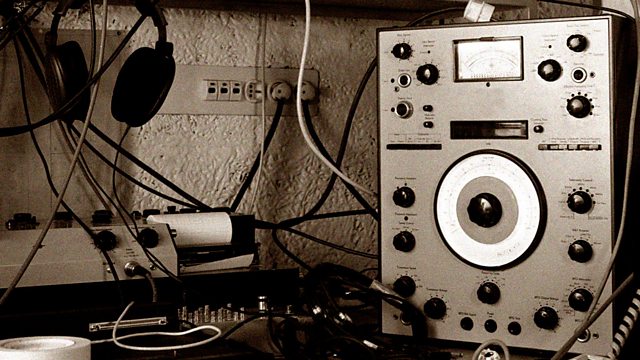 Sound artist Caroline Devine presents a celebration of the amateur radio enthusiasts - or hams - who eavesdrop on space exploration and communicate with astronauts.

Since the dawn of the Space Age, amateur "ham" radio has eavesdropped on our exploration of the cosmos. From Sputnik to the International Space Station, radio enthusiasts with homemade kit have been able tune into the distant sounds of space and talk to those exploring it. Caroline Devine, found space-sound artist, creates a composition from the ethereal sounds of space and the space hams and sends Between the Ears into orbit.

Owen K. Garriott reveals why he was the first astronaut to take amateur radio into space, opening up, for the very first time, the channels of communication with ordinary people back on Earth, a tradition still maintained on the International Space Station to this day.

And we hear newly released archive of US radio ham Roy Welch, who immediately after Sputnik's launch rigged up a makeshift station, looking up to the night sky as the satellite's eerie beat found voice in his ramshackle equipment.

Radio brought us Neil Armstrong's first transmission from the Moon and afforded ham operator, Larry Baysinger, the chance to intercept the radio transmissions between the astronauts. His recordings include the moment President Nixon transmitted his message of congratulations to them.

Interwoven with these are Caroline Devine's artful reworking of other cosmic sounds picked up by ham receivers from across the world to create an ethereal and magical journey, a momentary re-ignition of the childlike wonder of space.

Space Ham is a Whistledown Production for BBC Radio 3.

The Scalpel and the Bow