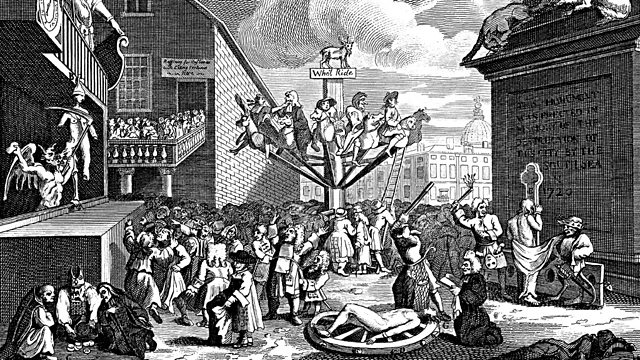 Melvyn Bragg and his guests discuss the South Sea Bubble, the speculation mania in early 18th-century England which ended in the financial ruin of many of its investors.

Melvyn Bragg and his guests discuss The South Sea Bubble, the speculation mania in early 18th-century England which ended in the financial ruin of many of its investors. The South Sea Company was founded in 1711 with a view to restructuring government debt and restoring public credit. The company would ostensibly trade with South America, hence its name; and indeed, it did trade in slaves for the Spanish market even after the Bubble burst in 1720.

People from all walks of life bought shares in the South Sea Company, from servants to gentry, and it was said the entire country was gripped by South Sea speculation mania. When the shares crashed and the company collapsed there was a public outcry and many people faced financial ruin, although some investors sold before the crash and made substantial amounts of money. For example, the bookseller Thomas Guy made his fortune and founded a hospital in his name the following year.

But how did such a financial crisis develop and were there any lessons learnt following this early example of a stock market boom and bust?

Anne Murphy
Senior Lecturer in History at the University of Hertfordshire

The Cult of Mithras

Helen Paul, ‘The South Sea Bubble: An Economic History of its Origins and Consequences’ (Routledge, 2011)