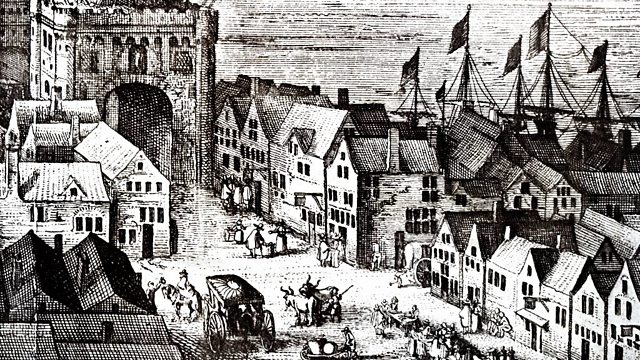 Pete Brown's history of pubs as seen through the story of one remarkable London inn, the George in Southwark, said to be the one-time local of Chaucer, Dickens and Shakespeare.

The George Inn is one of the few remaining galleried coaching inns, and lies a few minutes' walk from the Thames. 'Shakespeare's Local' takes us on a literary pub crawl through the history of this pub, from its regulars - the watermen, merchants, actors, craftsmen, writers and coachdrivers - as well as the many incarnations of the pub itself - from lawless Southwark tavern to coaching inn, theatre pub to Victorian drinking den, unfashionable boozer to tourist attraction.

This isn't only a history of half a century of pubs and drinking, but also a paean to the importance of the now declining pub to British society.

Today: the George's early days as a Southwark drinking den in the lawless neighbourhood south of the City.

Reader: Tony Robinson is best-known for his portrayal of Baldrick in the Blackadder series. He also presented Channel' 4's TV's Time Team, and is the author of numerous children's books.
Author: Pete Brown , the 'Beer drinkers' Bill Bryson' (TLS), was named Beer Writer of the Year by the British Guild of Beer Writers, and is the author of three other books on pubs and brewing.
Producer: Justine Willett.