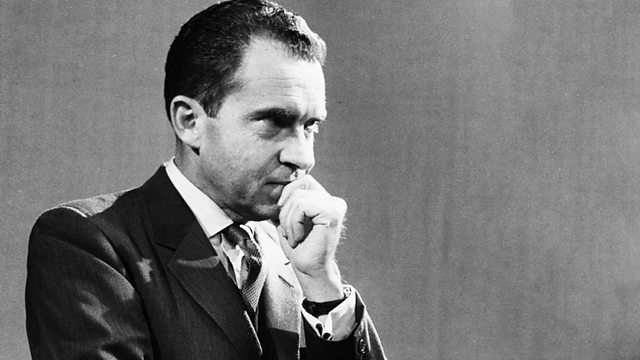 4 Extra Debut. David Frost turns to the archives to get beneath the skin of the 37th US President, Richard Nixon. From December 2012.

Watching Richard Nixon's first inauguration ceremony in January 1969, and hearing the prayer of the Reverend Billy Graham who stood by him at that ceremony, it seemed that here was an honest man of integrity. Yet much detail has emerged since that time demonstrating that the 37th President of the United States was less than upstanding in his dealings with his Democrat opponents and the American people.

But who was Nixon the man? What was he really like? Do all those allegations and solid facts alluding to his dirty tricks - the wire-tapping, the break-ins, the pay-offs, the "Commie" slurs, the Machiavellian manoeuvrings - add up to a thoroughly dishonest and dislikeable man?

Many of the Nixon insiders, some of whom were jailed and several of whom were sacked by their boss after the Watergate scandal, were not critical of Nixon - and others, such as Bob Haldeman, while not admitting to a love of Nixon, still claimed to respect him after the event.

Many observers and colleagues point to Nixon's awkwardness and aloofness, citing that he came across in this way because he was a diffident man who was not a natural politician. His speeches were often mawkishly sentimental and manipulative, simplistic in their appeal to an American down-home conservatism and a hatred of Communism. Yet he won two elections - the second a landslide despite the parlous state of a country being riven in two because of the Vietnam war.

In this programme, the man who got close to Nixon when in 1977 he taped nearly 29 hours of interviews with Nixon, Sir David Frost, searches through the BBC archives and the White House tapes to try to discover just what kind of man Richard Nixon was.

Lawrence of Arabia: The Man and the Myth

What Big Teeth You Have...