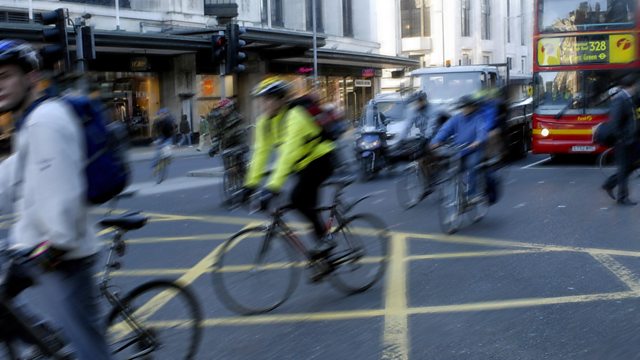 Documentary using cycle helmet camera footage to give a unique insight into the tension and conflict on Britain's roads, and following police as they chase down errant road users.

Life on Britain's roads can now be seen from a whole new perspective - thanks to the cycle helmet camera. As thirty four million vehicles and thirteen million bikes all try to share the same crowded space, this footage gives us a dramatic and unique insight into the unfolding tension and conflict.

From everyday incidents that get out of hand between cyclists and motorists, to stories of near-death experiences and fatal collisions, this timely documentary shows the battle between two wheels and four has never been so intense.

The programme shows both sides of the story, retelling dramatic incidents from both the cyclist's and driver's point of view. It follows the police on bikes as they chase down errant road users and record more than three thousand offences every year from car and bike users alike. We even see a cyclist who is attempting to police the roads himself, handing out his own 'tickets' for anything from texting behind the wheel, to jumping a red light.

A mother who lost her cyclist daughter in a fatal collision with a cement mixer tells us the extraordinary story of what she did to change cycle safety on our roads, while a black cab driver's own loss changed his opinion about cyclists forever.

See all clips from War on Britain's Roads (3)