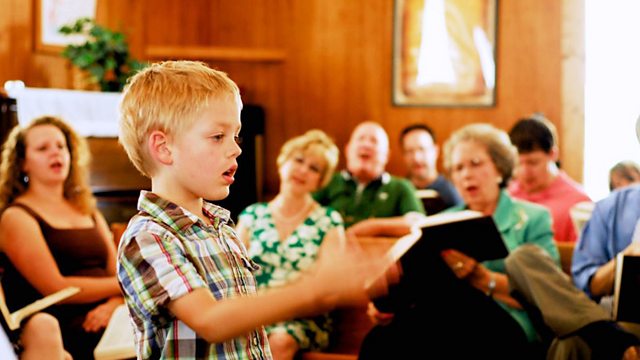 Songs of the Sacred Harp

Once called 'white spiritual', this haunting unaccompanied choral tradition survived in the small rural Baptist churches of the American Deep South. Very different to bluegrass and to African American Gospel music, Sacred Harp preserved Anglo-Celtic practices that were subsequently lost in the UK.

Today, this music is spreading from the Deep South around the US and is even developing a following in the UK. Cerys travels to an all-day singing convention in Alabama to find out why the music is not just surviving but flourishing. In an age when church attendance is dropping fast, what is attracting people all over the US and the UK to sing archaic hymns?

Also called 'shape note singing', the music is based around the Sacred Harp hymn book compiled in Georgia in 1844. The pages show different shapes above the words to indicate the notes, enabling songs to be sung on sight. Gatherings are arranged in a hollow square with the self-selected leader entering the middle to call out the number of their chosen song. No applause or audience is allowed. Far removed from 'happy clappy', they are often austere hymns with themes of death and the pain of everyday existence.

For information on Sacred Harp singing around the UK:
http://www.ukshapenote.org.uk/
http://londonsacredharp.org/

Produced by Joby Waldman
A Somethin' Else production for BBC Radio 4.