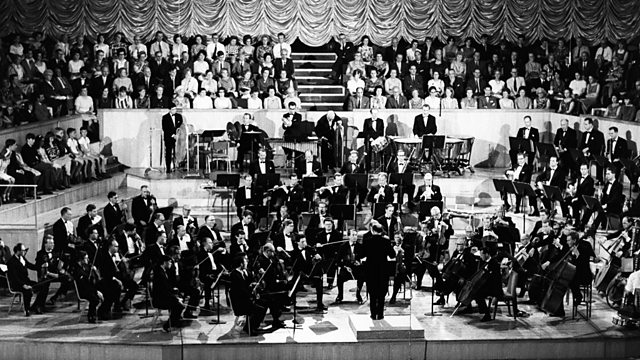 The Physicist's Guide to the Orchestra

4 Extra Debut. Trevor Cox on the physics behind orchestral instruments. Do the descriptions Benjamin Britten used in 1945 have a scientific basis? From December 2012.

In 1945, Benjamin Britten wrote The Young Person's Guide to the Orchestra, showing off the instruments of the orchestra in a short film. Viewers are taken through each section of the orchestra accompanied by a narration which describes the different sound quality of instruments: 'Clarinets ... make a beautifully smooth, mellow sound', flutes have a 'sweet voice' and the oboe has a 'plaintive quality.'

Trevor Cox, Professor of Acoustic Engineering at the University of Salford, looks at the physics behind the way orchestral instruments produce their unique sound. How is the sound produced, and how much does the material from which the instrument is made affect the sound?

Trevor talks to scientists who have studied musical instruments - David Sharp from the Open University, Mike Newton at Edinburgh University and Jim Woodhouse of Cambridge University. And members of the BBC Philharmonic provide the players' perspective.