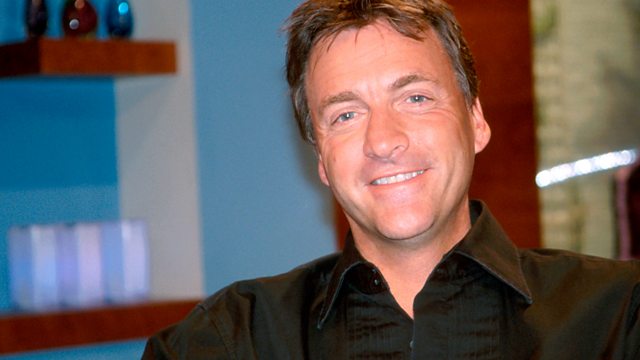 Sian Williams and Richard Coles with broadcaster Richard Madeley, and a man who's spent many years pretending to be him and his 'Uncle' Stan Madeley, a woman who believes the secret to happiness lies in the Hawaiian hula dance, a rock and roll history in poetic form from Murray Lachlan Young, a father and son who've revived the sound and style of the original Proms orchestra, a couple who have both been diagnosed with terminal diseases, John McCarthy in Maastricht and the Inheritance Tracks of musician and activist Nona Hendryx.

Richard and Sian are joined by the presenter and writer, to talk about family, fame and his new documentary about Squatters.

Murray performs a tribute to Richard and Judy and a Christmas ode to Cliff Richard.

For poems, see below.

JP hangs out with the virtual Richard Madeley.

INTERVIEW :: HANDING ON THE BATON

20 years ago John Boyden revived the New Queen’s Hall Orchestra, and now he is passing the baton to his son, Matthew.

Battersea-born Julie - aka vintage DJ Miss Aloha - on her love of Hawaiian hula dance, the hukilau.

COPING WITH LIFE-THREATENING DISEASE :: THE COULSTONS

Ulverston couple Clare and Paul Coulston discovered three years ago that Clare had oesphophogal cancer.  While she was recovering after a year of treatment, they received the news that Paul had Motor Neurone Disease.  They discuss the impact on their lives and family.

In the Netherlands John McCarthy  sees two very different churches in the province of Limburg, one in Maastricht converted into a bookshop the other in Thorn once an independent principality.

It all comes back to Cliff

The Saxon/ Sabbath/ Motor head
Progressive rock/ punk/ Goth/ undead
Spinal tap/ Devils kiss
And where IN ALL of THIS was Cliff?

In some drug ADDLED reverie?
No! Cliff was living by the sea
Making  pop and making wine
Looking tanned and feeling fine

Yes Cliff was doing Cliff’s own thing
Showing us that cliff could sing
Finding peace , finding God
Not caring if some thought it odd
That Cliff was breaking all the rules
By actually being happy, and being cool
And playing out the cosmic riff
Which in the end as Cliff found out
And all young bands should take note of
That it all comes back to Cliff

But some, they HAVE and some have not
Ascended to the very top
And walked up the aisle, and tied the knot
Then live as one above the shop

So Saturday live gives its loose salute
For all the being all that they can be
To Man and wife we raise our mugs
To the fabulous Judy Finnegan and the unacceptable face of capitalist commercial television (here in the flesh) Mr. Richard Madeley