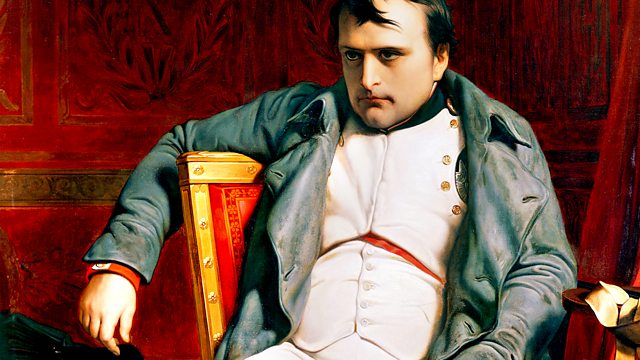 Epic drama charting Napoleon's meteoric rise during the French Revolution, set against his tumultuous relationship with Josephine. Adapted from a novel by Anthony Burgess.

An epic drama charting Napoleon Bonaparte's meteoric rise in the early years of the French revolution, set against his tumultuous relationship with Josephine. Written by Anthony Burgess but never performed in his lifetime and now adapted for radio by Anjum Malik.

Burgess was fascinated by Napoleon and wrote a novel, Napoleon Symphony, using the structure of Beethoven's Eroica symphony, originally written in honour of the French leader. Burgess approached director Stanley Kubrick about using the novel as the basis for a film Kubrick planned about Napoleon - the two had worked together on Burgess's A Clockwork Orange. Kubrick politely declined. Burgess then wrote the play: Napoleon Rising - but it never reached the stage.

This radio version stars Toby Jones as Napoleon, Jenny Jules as Josephine and Alex Jennings as Talleyrand. It offers a vision of the young Napoleon finding his military and political feet in the early years of the French revolution, set against his tumultuous relationship with Josephine. Burgess's writing is full of humour, intelligence and historical detail. Napoleon Rising is an ambitious, unusual drama, focusing on Napoleon the man as much as the legend he became.

Anthony Burgess was a prolific writer. He wrote over 50 novels, the most famous of which is still A Clockwork Orange, made into a controversial film by Stanley Kubrick.

Anjum Malik is a scriptwriter, poet and Honorary Writing Fellow at Manchester Metropolitan University, as well as Writer in Residence at International Anthony Burgess Foundation.

With thanks to Andrew Biswell and the International Anthony Burgess Foundation.