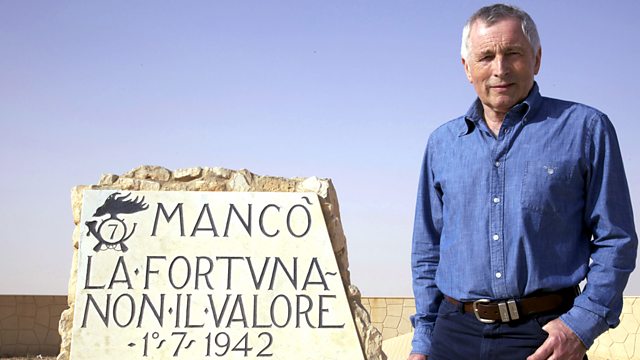 Jonathan Dimbleby travels to the key locations in the North African campaign of World War Two, and sheds new light on the significance of this crucial campaign.

On 13 September 1940, 80,000 Italian troops marched into Egypt to threaten the epicentre of the British Empire at a critical point in the Second World War.

By 1942, the desert skirmish in North Africa had become pivotal to what was by then a truly global conflict, with hundreds of thousands of men from over ten nations fighting on one of the most inhospitable battlefields on Earth, culminating in the Battle of El Alamein. It was a triumph that marked, in Churchill's famous words, 'the end of the beginning'.

This is the story of how the men who fought and died here were players in a volatile drama scripted by Churchill, Roosevelt, Mussolini and Hitler in the war capitals of London, Washington, Rome and Berlin.

Jonathan Dimbleby travels to all the key locations, among them the Cabinet War Rooms deep beneath Whitehall, Hitler's vast bunker in Poland, the tunnels under Malta where civilians sheltered from the Nazi bombs and the Brenner Pass, where Hitler and Mussolini met to decide the world's fate.

Based on Dimbleby's book, Destiny in the Desert, the film sheds new light on the significance of this key campaign, on which Churchill gambled both his own future and that of Britain itself.