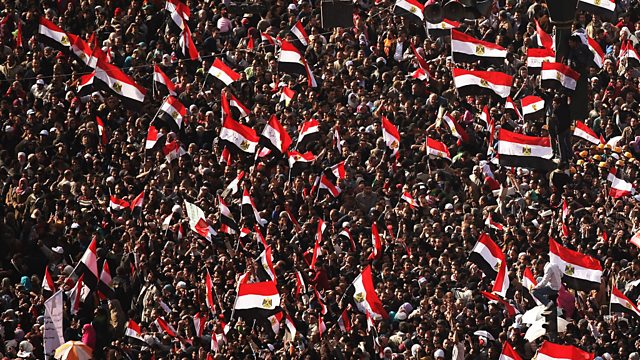 Green Shoots from the Arab Spring

Christopher de Bellaigue travels to Egypt in an attempt to understand how the Arab Spring has changed the culture and mindset of ordinary individuals.

With the downfall of the former Egyptian president, Hosni Mubarak, political change has already happened in Egypt. But how has such a revolution affected the mindset of ordinary people in the region?

In this edition of Analysis, the writer, Christopher de Bellaigue, considers the consequences for Arab society of a new culture in which ordinary people openly question those in authority - not just in the political sphere but within the family and religious realm too.

The programme explores a number of examples: From an apparent new determination to resist paying bribes to public officials, through a greater desire to see active debate rather than passive obedience in the classroom, to the growth of salafists - conservative Muslims who advocate a return to the core texts of Islam and a less deferential attitude towards the traditional scholars.

Though not all these phenomena were unknown before the Arab Spring, the political revolution does seem to have fuelled their growth: Key to many appears to be the disappearance of personal fear - one unmistakable consequence of the demise of the Mubarak regime. Today, despite often remaining wary of the future, Egyptians are, it seems, fearlessly asserting their own views as never before, without seeking external validation.

Questions, however, remain: If a new, more assertive mentality is indeed emerging, who shares it - and crucially, who does not? Would such an increased personal conviction necessarily result in more pluralism, as is sometimes assumed in the west, or give greater voice to Egypt's innate social and religious conservatism? And what are the chances that it could survive the country's overwhelming economic and political problems?

The Rise of Executive Power