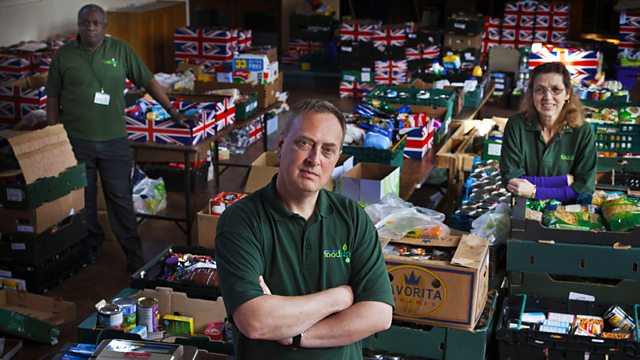 David Modell investigates the growing importance of charity foodbanks to thousands of hungry people across the UK by following the stories of three users of a foodbank in Coventry.

Care-leaver Charlotte eats just one meal a day. It's all she can afford, so she starves herself till evening. Sandra, middle class mother of five, is embarrassed that all she can give her son for his school packed lunch is bread and butter. Middle manager Kelly, mother of two, hasn't eaten for two days. Meet Britain's hidden hungry - and they're not what you'd expect.

As of 2012, more than 170,000 people are believed to be dependent on a chain of 300 foodbanks run by a Christian charity, the Trussell Trust. Bafta award winning film-maker David Modell has spent six months at the Coventry foodbank following the stories of Charlotte, Sandra and Kelly to find out how, in 2012, so many Britons are suffering genuine and prolonged bouts of real hunger.