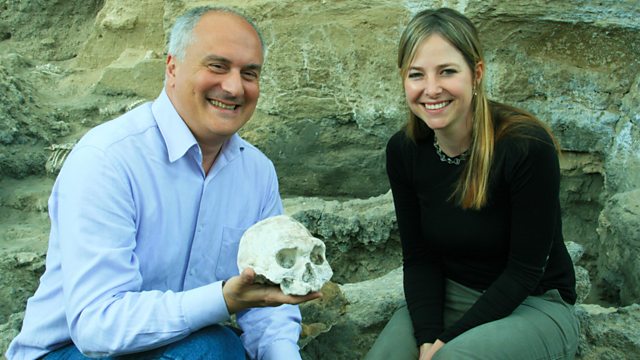 Alice Roberts, George McGavin and a team of experts rebuild our ancient ancestors from the bones up. They reconstruct one of the earliest humans, Homo erectus.

At the Prehistoric Autopsy HQ in Glasgow, anatomist professor Alice Roberts and biologist Dr George McGavin continue their journey back into our evolutionary past.

They are going back 1.5 million years to meet one of the earliest humans. Once again with the help of a team of international experts, this shows the recreation of one of our most successful prehistoric ancestors from the bones up. They walked the earth far longer than any other human species and were the first ancestors to look a lot like we do today. The species is Homo erectus and the individual being reconstructed is known as Nariokotome Boy.

To make the reconstructions as accurate as possible, Alice and George have travelled the globe, gathering evidence from the world's leading scientists. In the lab at the Prehistoric Autopsy HQ, scientists put the latest theories to the test to see how similar or different we really are to our ancient ancestors, while experimental archaeologists look for clues as to how they lived.

All the research has been fed to a team of model makers who have spent months painstakingly reconstructing his skeleton, muscles, skin and hair.

The team reveal the latest research that suggests Homo erectus were good hunters, were skilled at making stone tools and could probably control fire. They also look at evidence that suggests some individuals were helping those who couldn't help themselves. It may be the oldest evidence we have for something we think of as a human trait - compassion.

And in the end the carefully reconstructed Narikotome Boy will finally be revealed as we come face to face with another of our prehistoric ancestors.

See all episodes from Prehistoric Autopsy

See all clips from Homo Erectus (2)