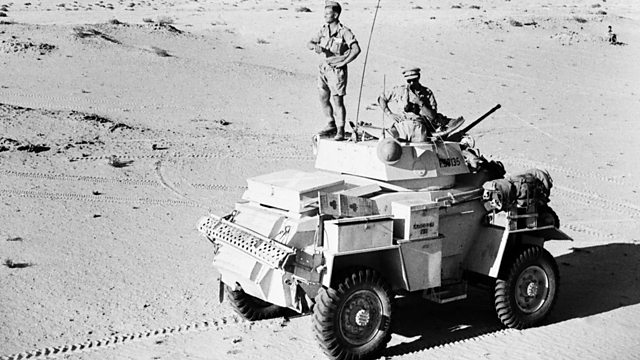 Seventy years after the WWII battle, Mike Greenwood travels to El Alamein in Egypt on the trail of a unique anthology of poems written by soldiers who served in the western desert.

Benghazi, Tobruk, Tripoli - they are all places with resonance for a disappearing generation of British soldiers who fought in the western desert in the Second World War. This programme revisits a remarkable anthology of poems that grew out of the experiences of those that took part.

The Oasis anthology was edited by a group of soldier-poets in Cairo in 1943. Unlike their forbears, the poets of the First World War, none was above the rank of corporal. And the poems they gathered together represent the missing voices of war - the men and women from all branches of the services of the citizen army that fought its way from the Nile delta to Tunis.

The poetry evokes the boredom and the terrifying activity of war, the minutiae of daily life, the alien but beautiful environment of the desert, reflections on lost comrades and dead enemies, the purpose and the pointlessness of war.

The original print run of 5,000 copies quickly sold out. The war ended and people returned to their lives. Then in the late 1970s the surviving original editors came together again. They launched an appeal via the press for further unpublished poems. Manuscripts came in by the thousand. They were edited and combined with the original anthology in Return to Oasis, perhaps the most complete poetic account of the collective war experience.

Mike Greenwood returns to the western desert as veterans gather in El Alamein to mark the 70th anniversary of the campaign. He talks to military historian Julian Thompson and veterans to evoke a world at war in the western desert, discusses the Oasis anthology with poet Owen Sheers and professor of literature Antony Rowland - and we hear the poems in readings and archive.