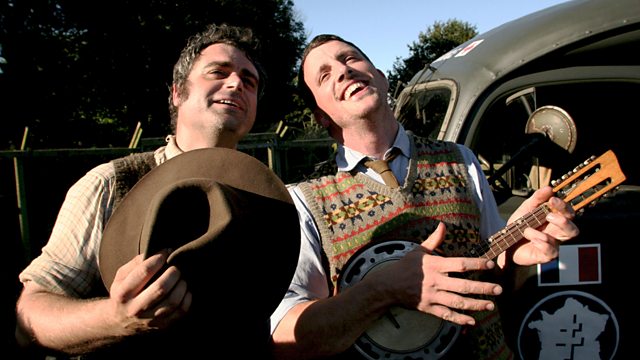 Recreating the farming conditions of 1944, when 3.5 million troops packed into the fields of southern England, as the Allies prepared for the D-Day landings.

The team face the farming conditions of 1944, when Britain had been at war for five long years and the fields surrounding Manor Farm filled up with thousands of troops as the Allies assembled the largest naval task force in history for the D-Day landings.

Farmers did their bit by growing vast amounts of flax, which was used to make parachute webbing, fighter aircraft fuselages, tents and ropes, with production in Britain increasing from 1,000 acres to 60,000. But the wettest summer for a century has devastated the crop at Manor Farm, and if Alex and Peter are to save it they must take drastic action.

This wasn't the only way farmers helped the D-Day preparations. Racing pigeons were requisitioned by the military to carry vital intelligence to and from occupied France. Ruth revives the traditional craft of basket making to create a pigeon transporter while Alex and Peter head out into the English Channel to find out how birds were trained for their long missions.

The war brought farmers face to face with the military as never before, and artist Leo Stevenson follows in the footsteps of the war artists commissioned by the government to capture the wartime landscape on canvas.

As D-Day drew ever closer, 3.5 million troops packed into southern England. Foreign troops formed close bonds with the locals, drinking together and playing games. The team recreate a baseball game that the Americans played here in 1944 and conclude that the villages of Britain had never been so vibrant.