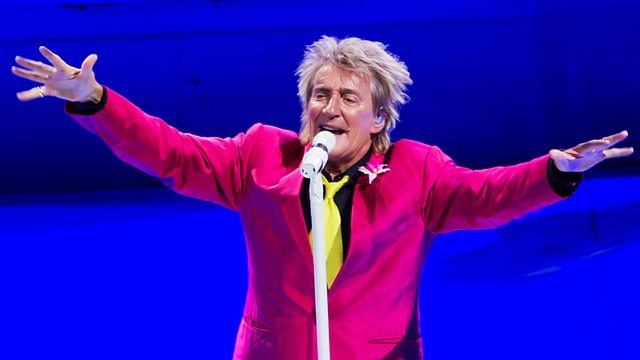 Kirsty Lang speaks to Rod Stewart, as he looks back on a career spanning six decades; new exhibition dedicated to Henry Prince of Wales; and Tyneside-set sitcom Hebburn reviewed.

Rod Stewart, the gravelly-voiced singer, songwriter, and stadium-filling star behind hits such as Maggie May and You Wear It Well - and chart-topping covers including I Don't Want To Talk About It - talks to Kirsty about his passion for art, how his less than perfect harmonica playing opened doors for him, and his only regret.

Hebburn is a culture clash TV sit-com about what happens when a Geordie twentysomething brings his Jewish wife home to meet his family. Critic Boyd Hilton delivers his verdict.

The Lost Prince at the National Portrait Gallery is an exhibition which focuses on the life of Henry Prince of Wales, son of James I, who was destined to become King Henry IX, but died at the age of 18. The exhibition includes his post-mortem report as well as miniatures, manuscripts and paintings and gives a glimpse into the culturally rich life of the young prince. Historian Suzannah Lipscomb reviews.

Singer Lana Del Rey opens her new song with a long spoken section. The track joins an illustrious back-catalogue of songs where singers choose to speak over the music. David Quantick talks his way through his favourites, including Meat Loaf, Julian Cope, David Bowie and Diana Ross.

Ginger & Rosa, Ralph Steadman on birds, the man who lights the Rolling Stones