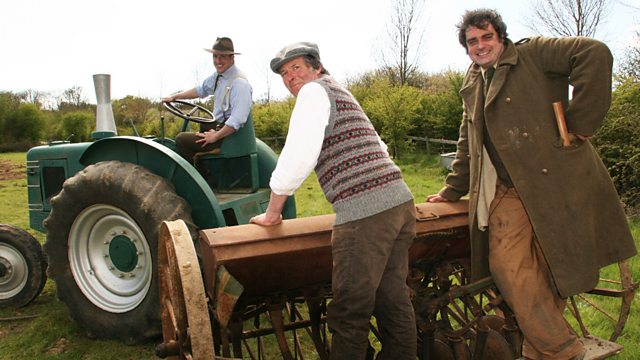 Recreating British farming as it was during World War II. The team faces a government inspection for productivity. Over 2,000 wartime farmers lost their land for failing these.

The team discovers that Wartime Farmers could lose everything - their home and their land - if the government did not think they were productive enough. Over 2,000 farmers deemed 'not good enough' were thrown off their farms during the war.

Ruth, Peter and Alex face a Second World War-style government inspection, meeting an expert who tells them to grow and to get their milking operation up and running.

In the process they confront the wave of mechanisation that government regulation brought to wartime farming, grappling with a new tractor and getting to grips with a milking machine. Yet they are dealt a bitter blow with the loss of a prime dairy cow. Peter also launches a rabbit-breeding concern and they take in the latest release from the Ministry of Information, who made films urging farmers to use the very latest techniques in the fields.

The team also discovers the chilling story of a local farmer who lost his life in a dramatic shoot-out with the police after the authorities tried to remove him from his farm for failing to meet his required targets.

With their hard work completed the inspector returns to judge the state of the farm and award them their all-important official 'grade' - determining whether their efforts have been a success or a failure.