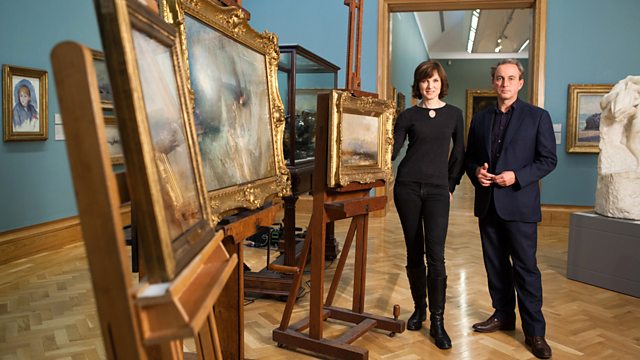 Turner: A Miscarriage of Justice?

Fake or Fortune? Series 2
Episode 2 of 3

Fiona Bruce and Philip Mould investigate three landscapes once thought to be by JMW Turner, which were bequeathed to the National Museum of Wales.

In the early years of the 20th century, spinster sisters Gwendoline and Margaret Davies spent much of their vast fortune buying the cream of European art as a gift to the people of Wales. When Gwendoline died in 1951, all the paintings in her collection were bequeathed to the National Museum of Wales. Amongst the works most proudly displayed were many by JMW Turner, perhaps the nation's best loved artist. These paintings were the pinnacle of the sisters' collection, carefully selected and greatly valued.

Yet within months of this extraordinary act of generosity, the authenticity of the paintings was thrown into doubt by art world experts who branded them fakes. These prized exhibits were deemed 'unfit to hang on the gallery's walls'. For more than half a century a cloud has hung over three of the landscapes, said by experts to be a hand other than Turner's. But Philip believes this may be a miscarriage of justice. As Philip and Fiona investigate, they enter a murky world as they discover the paintings are connected to Turner's secret lover. In the end it will be down to the latest forensic testing in order to prove if the paintings were by Joseph Mallord William Turner. But will the process restore the Davies sisters' reputations as art connoisseurs and allow the pictures to see the light of day once again?

Degas and the Little Dancer—Series 2