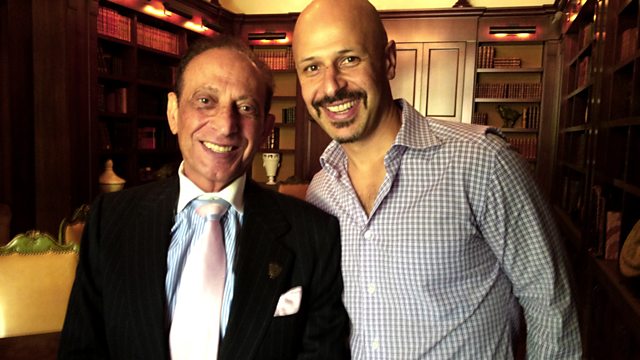 4 Extra Debut. Comedian Maz Jobrani takes a journey to Tehrangeles, home to the largest Iranian diaspora in the world, right in the heart of Los Angeles. From September 2012.

Comedian Maz Jobrani takes a journey to Tehrangeles - home to the largest Iranian diaspora in the world, right in the heart of Los Angeles.

Recorded on location, Iranian stand-up comedian and actor Maz Jobrani begins his journey in a street lined with Iranian stores, restaurants, beauty salons, cafes and businesses, where everyone speaks Farsi and all the shop signs are in Persian. But this is not downtown Tehran - this is Westwood Boulevard in Los Angeles, a stone's throw from affluent Beverly Hills, where 22% of the population are Iranian, and whose former Iranian born mayor Jimmy Delshad epitomizes the extraordinary success of Iranians in LA.

When bookshop owner Bijan Khalili set up shop here over 30 years ago, there were only a few Persian stores. He and others along Westwood Boulevard tell the story of how and why the LA community steadily grew into a Mecca for hundreds of thousands of Iranians. And how, against the backdrop of 32 years of hostility between America and Iran since the 1979 US hostage crisis, they have succeeded in making their mark. Even Bravo TV (creators of The Kardashians) have recently aired a hit reality TV show about the lives of a group of affluent Beverly Hills Iranians.

LA based Iranian- American comedian and actor Maz Jobrani delves into the heart of this unique and diverse microcosm of Iran in the heart of LA, otherwise known as Tehrangeles, to reveal the surprising stories and insights into the lives of Iranians who have recreated Little Tehran in the City of Angels.