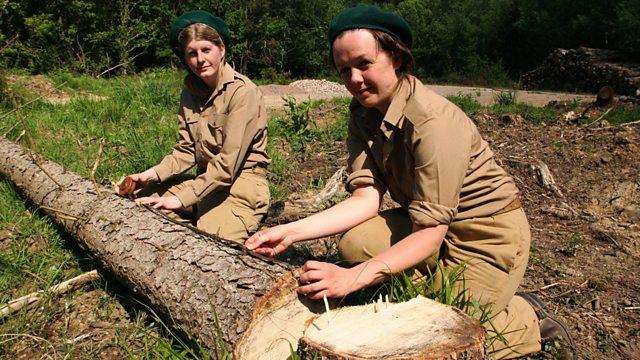 Recreating the farming conditions of World War II. The team tackle the shortages of fuel, food and wood that the nation faced in 1942 due to the U-boat blockade of the UK.

The Wartime Farm team tackles the conditions faced by British farmers in 1942, when Hitler's U-boats continued to attack British ships, slashing imports and inflicting massive shortages on the country.

Ruth finds out how Britain coped with shortages of the wood vital for the war effort in the building of aircraft, ships and rifles, as well as pit props for crucial coal mining. With her daughter Eve, she travels to the New Forest and discovers how women known as 'Lumber Jills' were drafted in to fell trees in the Women's Timber Corps.

Meanwhile, Peter and Alex face up to the wartime petrol crisis. Peter embarks on an ambitious plan to convert a 1930s ambulance to run on coal gas. Alex experiences the conditions faced by the Bevin Boys - conscripts who were sent to coal mines instead of the armed forces because the need for coal was so great. Having converted the ambulance and collected the coal to run it, Peter faces the question: will it work?

Also in this episode, the boys revert to a Victorian solution to the shortage of animal feed - using traditional horsepower to operate a root slicer - whilst Ruth sets up an Emergency Feeding Centre. Subsidized by the government to provide cheap food off ration for air raid victims, these 'British Restaurants', as Churchill dubbed them, quickly caught on. Eating out had traditionally been the preserve of the upper class and most ordinary people had never eaten in public before - many even felt embarrassed at the prospect. The 'British Restaurants', envisaged as a short-term response to food shortages, made a lasting change to the nation - introducing the concept of high street dining for the masses.