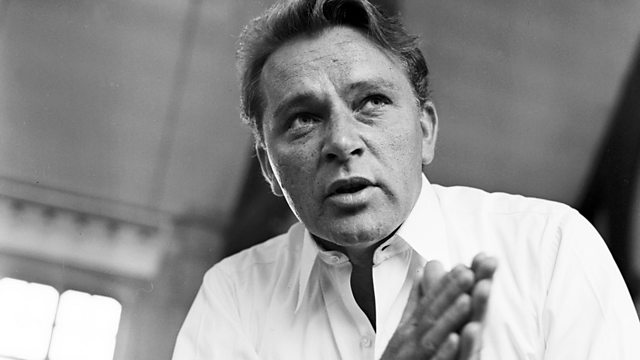 4 Extra Debut. Richard Burton was the Welsh miner's son who became a superstar of stage and screen. Melvyn Bragg reassesses Burton through the actor's private diaries.

The archive of Richard Burton is a rich treasure. The performances are by common consent amongst the most compelling of any age, given in a voice that many have felt to be an aural equivalent of heaven. Hamlet, Under Milk Wood, Who's Afraid of Virginia Woolf and Equus stand out, and then there are the blockbusters: Wild Geese, Where Eagles Dare, Anthony and Cleopatra, Night of the Iguana and The Robe. Add to that the poetry readings - Dylan Thomas of course but also Shakespeare and the English Classics. It is a feast for the ears.

Yet it is a remarkable testament to the man and to his life that, just as magnetic as the body of work, is another collection. Through several periods of his life, most notably from the mid-1960s to the early '70s (his 'superstar years') he kept a diary, sometimes handwritten, mostly typed out and assembled in thick notebooks. The diaries provide a unique view of the world in which he moved, among actors and directors, writers and poets, millionaires and royalty. They also give an insight into his approach to acting, his insecurities, his drinking and his volatile relationship with Elizabeth Taylor at a time when they were the most famous couple in the world.

Twenty-five years ago, shortly after Burton's death, Melvyn Bragg was given access to the diaries to write his definitive biography of Burton, Rich. Now, to mark the publication of the complete diaries, Bragg presents an Archive on 4 which examines Burton's life through broadcast interviews and the previously inaccessible lens of his diaries. Bragg returns to Burton to reassesses the man in the light of his own experience and in the light of the private and confessional thoughts that Burton wrote, alone, throughout his life.

Burton was the gifted son of a Welsh miner. He met a remarkable teacher and made the journey to Oxford and on to superstardom - but he was seldom really happy. He was a hellraiser who often behaved appallingly and was accused of squandering an extraordinary talent on drinking and bad movies. If that was all he was then he'd be just a footnote in 20th century culture. But Burton was also a man of wonderful erudition, passion, insight and self- knowledge. He fought his way through life through force of will, love, and voracious reading. It is this side of the man that makes him such a remarkable presence. It is also a side of him captured in a rich vein of BBC archive and interviews.

The diaries show him on top of the world, in love, in despair, and fighting the alcoholism that had killed his father and he knew was killing him. This programme puts the flesh and the voice back into our collective understanding of one of the great cultural figures of the 20th century.