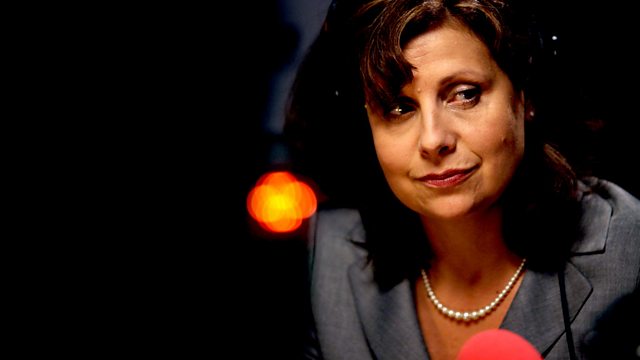 The actress and her writing partner (who is also her elder brother) meet in the talk tag show where the guest is the next interviewer. From July 2012

Rebecca Front is interviewed by the man who knows her best, her big Brother Jeremy Front.

"I have a very strong childhood memory of you playing the flute in a concert and falling off stage into a box of fezes."

The Chain starts with star of The Thick Of It, Grandma's House, The Day Today and most other comedies of note over the past twenty years, Rebecca Front, speaking to the man who knows her best, her writing partner and big brother Jeremy Front.

They cover childhood teasing and being a woman in comedy, reveal how a cough scuppered Rebecca's chances of working with Mike Leigh and end with Jeremy attempting to maker her re-live an amusing childhood trauma.

"I've heard all the anecdotes so I'll probably just read a book."

The chain continues with:

Rebecca Front talking to her Thick Of It co-star and fellow non-nudist, Chris Addison, about working with Armando Iannucci and embracing his middle-classness through stand-up;