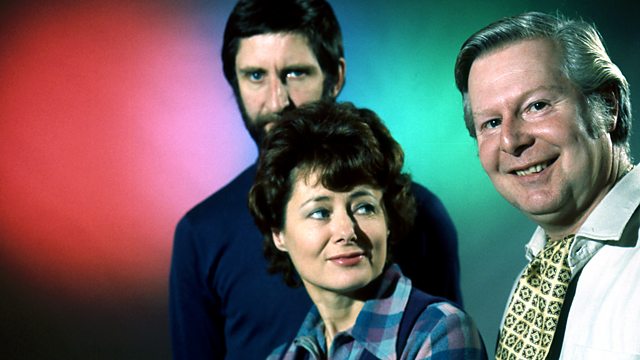 Britain in a Box Series 5
Episode 3 of 3

Paul Jackson recalls the classic, quirky children's TV show made to involve children with impaired hearing through a mix of art, animation and stunts. From July 2012.

As Children's TV wave goodbye to BBC1, heading off to their own dedicated channel, Paul Jackson takes a lingering look back at a cult show from the golden era of children's TV. "Vision On" was one of the most successful, funny and anarchic programmes ever to grace the little grey box in the corner; it's 'Gallery' theme music still a trip down memory lane for viewers of a certain age.
Created in 1964 to replace the prosaic "For Deaf Children", Pat Keysall and Tony Hart fronted a programme that aimed squarely at the funny bone. Art, animation, clowning and dangerous stunts - long before "Health and Safety" became a dirty word. "Vision On" was aimed at all children, but worked hard not to exclude the hard of hearing.
Rather than creating a worthy line up, producer Patrick Dowling cultivated the silly, the extraordinary and the dramatic, using new technology to create effects and giving breaks to a wealth of creative talent, acting and technical.
David Sproxton, creator of Aardman Animations, fondly recalls creating his very first short film for "Vision On", while Sylvester McCoy who went on to became Dr Who, and is currently filming The Hobbit with Peter Jackson, recalls close encounters of an explosive kind with the fabulous creations of Wilf Lunn, another graduate of the Ken Campbell school of fearlessness.
"Britain In A Box" explores the role of disability programming with past and present BBC children's controllers; Edward Barnes and Joe Godwin, and talks to Susan Daniels from the National Deaf Children's Society about how TV can be accessible to all - something "Vision On" pioneered with style.
Remembered that Gallery theme music yet?
Producer: Sara Jane Hall.