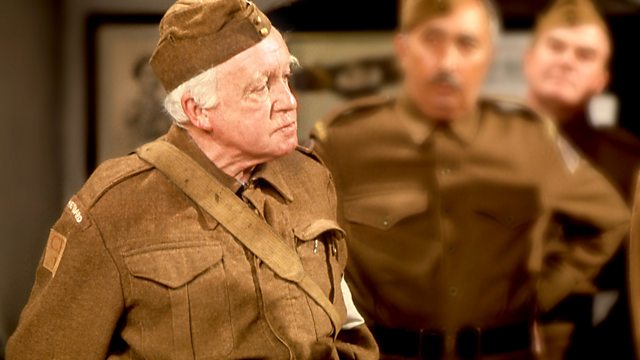 Poet Paul Henry, explores the true story of how Dad's Army's Private Godfrey, whom the nation took to its heart, belied an altogether more complex character: Arnold Ridley. Nearly a century after the outbreak of the First World War, one of its most enduring heroes lives on in the living rooms of millions.

Behind the genteel, lovable, incontinent elder that was Private Charles Godfrey was the much more complex character of the actor and playwright Arnold Ridley. In Excusing Private Godfrey, passionate Dad's Army fan Paul Henry will highlight the true story behind the humour, challenging the listener's preconceptions of Godfrey and bringing the horrors of WW1 and WW2 into sharp focus. The programme explores the many sides of Ridley's character and life through interview, personal diary, clips from the films, plays, and of course clips from Dad's Army. Paul Henry will delve into Ridley the soldier, how his Somme experience and war injuries shaped the rest of his life.

In Dad's Army, Godfrey was a former conscientious objector. In reality, Arnold had been a battle-hardened lance corporal with the 6th Somerset Light Infantry, who went over the top on the morning of September 16, 1916. Paul Henry finds out about his love and family life and relationship with his son Nicholas - who is interviewed for the programme. Henry delves into Ridley the playwright through his 1941 film The Ghost Train and other plays, and find out how this successful writer was both entrepreneur and eventual bankrupt. In addition, Paul Henry will unmask Ridley the actor - how did he end up as a character in Dad's Army, and what was the impact of his time spent in Forces entertainment.