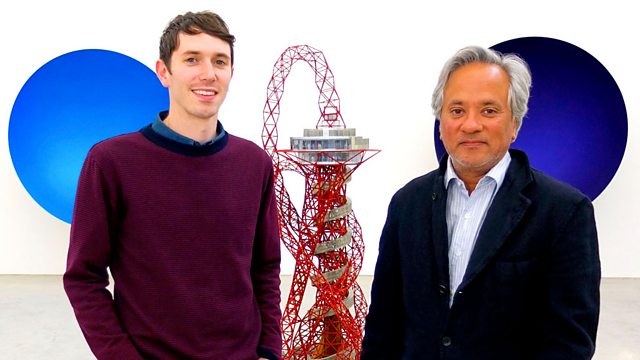 Into Orbit: A Culture Show Special

In this one-off special, The Culture Show goes behind the scenes to follow Anish Kapoor and Cecil Balmond's Orbit sculpture from commission to completion.

Anish Kapoor and Cecil Balmond's Orbit sculpture is the most spectacular artistic creation of 2012 - a gravity-defying, breathtakingly dynamic scribble of crimson steel. Standing twice the height of Nelson's Column, it now towers over the Olympic Park, and has already inspired strong reactions. It is the biggest piece of public sculpture this country has ever seen - a bold statement of artistic ambition and a giant engineering challenge.

In this one-off special, The Culture Show goes behind the scenes to follow it from commission to completion, and discovers just how difficult it is to build a tower for the 21st century.

Featuring interviews with Boris Johnson and Lakshmi Mittal along with exclusive access to Kapoor and Balmond as they strive to realise their vision in the face of some Olympian challenges.

Who on Earth Was Ford Madox Ford? A Culture Show Special

See all clips from Into Orbit: A Culture Show Special (4)