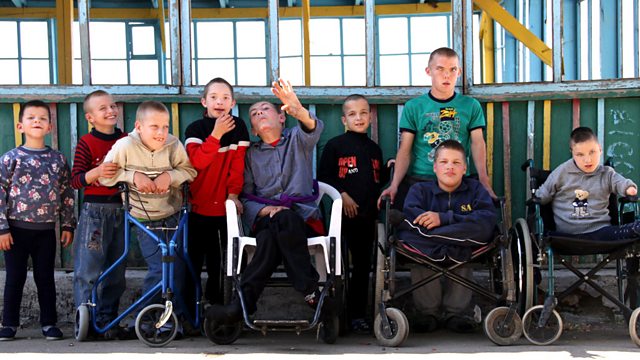 Filmed in an institute for disabled and abandoned children, Kate Blewett finds out what a lifetime in the care of the state really means for Ukraine's forgotten youngsters.

Ten times as many children are in institutional care in Ukraine as in England. In this disturbing investigation, film-maker Kate Blewett finds out what a lifetime in the care of the state really means for Ukraine's forgotten children.

Shot over six months in an institute for disabled and abandoned children, the film takes us inside the lives of a handful of children who were abandoned by their parents - with a simple signature - to state care. The institute houses 126 children, of whom all but four still have living parents. The vast majority are what are called 'social orphans' in Ukraine, signed over to institutional care in a society that still clings to the Soviet-era ideal that the state knows best. But what Kate finds is that children of widely varying abilities are warehoused together, leading inevitably to institutionalisation, repetitive behaviour, self-stimulation and self-harm, even amongst those with very minor disabilities.

Lyosha is ten, and has no arms and legs. But with a fighting spirit and lively intelligence, he uses his balance and powerful neck muscles to propel himself around the room, along corridors and even up and down stairs, almost as quickly as those around him with four limbs. He is proud of the fact that he makes his own bed every morning, and will not allow carers to help him do so. Lyosha is just one of a group of boys for whom Nikolai, the institute director, has great ambitions. Nikolai has seen too many of the children he has cared for leave at 18, to be transferred to psychiatric or geriatric homes, labelled as incapacitated and effectively robbed of their human rights and their future. He has gained funding from Russia for a small group home for boys like Lyosha whom he feels have the greatest unrealised potential. Once in this home they will get the education and rehabilitation they need to avoid a future without hope or freedom.

Kate also meets young men in their 20s and 30s who were not so lucky. Despite clear evidence to the contrary, Boris, Dennis and Leonya have all been categorised by the state as 'incapacitated' - unaware of, and unable to control, their actions. Following their fight to find some way to challenge this quasi-legal label, which robs them of many of their fundamental rights, Kate hears their tales of beatings, isolation cells and the abuse of chemical straitjackets as punishment in a psychiatric institute named Novosivitsky that became notorious in Ukraine in 2010 after an inmate was beaten to death. Boris says of his time there 'It was so painful, like living under the lid of a coffin'.

In parallel with the fight of the incapacitated for legal freedom and the journey of Lyosha and his friends into a small group home, Kate also follows the stories of some of the sickest children in Nikolai's care. Margarita is five, but gravely ill. Instead of being in a hospital she has been sent to Nikolai's remote institute, where there are no specialist medical facilities and the medical director, responsible for all the children, is a retired dentist. Desperately worried about Margarita's worsening condition, Nikolai takes her to the local hospital, but officials there say she must be discharged back to the institute as soon as her temperature stabilises. The doctor in charge of her care says 'I understand her condition is catastrophic, but this is a disaster from long ago, from the child's birth - she is a child who has been abandoned'.

Around £9 billion has been spent in Ukraine in preparation for hosting Euro 2012 in June, but while vast sums have been found for infrastructure in the major cities, the budgets for the weakest members of society have been under strain. This film takes us into a disturbing world that the Ukrainian government would rather outsiders did not witness. It is a powerful and emotionally gripping indictment of a system that hides orphan children away in remote and inaccessible institutions, before labelling many of them as beyond rehabilitation.