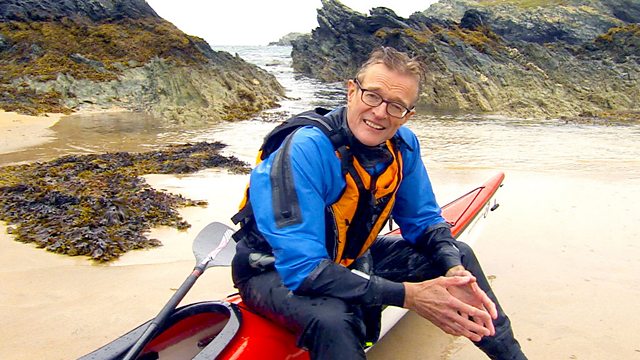 The Riddle of the Tides

The tidal ebb and flow of the seas surrounding Britain at their most extreme, when boatmen are pushed to their limit and hidden secrets emerge.

A journey around Britain to experience our surrounding seas' tidal ebb and flow at their most extreme.

Nick Crane confronts the terrifying power of the tides head-on as he paddles for dear life in a kayak to conquer the fearsome, tidal rapids that swirl off the island of Anglesey. Then in Liverpool, he discovers a remarkable but forgotten machine used to predict the tides for the D-Day landings. Developed over 100 years ago, this massive mechanical computer is capable of calculating sea levels anywhere in the world many years in advance and with incredible precision. As it is painstakingly pieced back together, Nick meets one of the women chosen to operate it so many years ago.

Miranda Krestovnikoff ventures to Jersey for an expedition to the Seymour Tower, a spectacular fortress that is transformed daily into an island outpost at high tide. Miranda stays overnight in the Tower to await an exceptionally low 'Spring Tide', when exotic sea creatures might be revealed. In Scarborough, Tessa Dunlop challenges both changing times and the tide of fashion. She's putting bathing suits to the test on the beach, from a Victorian lady's cotton cover-up to a Swinging Sixties little nylon one-piece, as she explores the ebb and flow of stylish swimwear over a century of textile innovation.

Mark Horton heads to Poppit Sands in Wales, where at very low tide the faint outline of a huge stone structure mysteriously appears beneath the waves. Mark explores the remains of this massive medieval fish trap, which was built more than 900 years ago but lost as sea levels rose and only recently re-discovered. Yet who was so famished for fish that they constructed this elaborate, sub-sea, stone structure to harvest the bounty of the tides?

The Secret Life of Beaches—Series 7