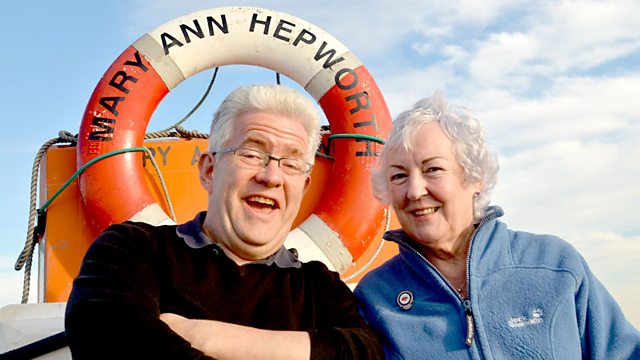 Peril from the Seas

Coast ventures to the furthest-flung reaches of the British Isles. Nick Crane tells the astonishing tale of the Great Storm of 1703.

Nick Crane leads a journey around the wildest shores of the British Isles to explore dramatic untold stories of peril from the seas.

Nick tells the astonishing tale of the Great Storm of 1703, the most devastating weather event ever to hit southern Britain, when lethal winds whipped in from the Atlantic to claim the lives of one in five seamen of the Royal Navy. Thousands perished and Nick reveals how the winds of this mighty storm set more than 400 windmills ablaze and blew ships from our shores all the way to Norway. So deadly is the Norfolk coast to shipping that some 200 years ago it also gave birth to one of Britain's earliest emergency services, known as the 'The Beachmen', Nick meets descendants of this hardy band of boatmen who managed to turn peril from the seas into a profitable rescue business.

Coast newcomer, poet and storyteller Ian McMillan, uncovers the forgotten story of another shipwreck which held Britain transfixed at the outbreak of the First World War. For two terrible days in 1914 more than 200 victims aboard the hospital ship Rohilla fought for their lives within sight of the Yorkshire fishing port of Whitby. Mary Roberts, one of those rescued, had survived the sinking of the Titanic just two years earlier, but said her experience on the Rohilla was even worse. With historic lifeboats, relatives of the victims, and extraordinary 1914 newsreel footage, Ian McMillan relives the tragic events that changed our lifeboat services forever.

Tessa Dunlop reveals what a perilous workplace it was for the men building Britain's first iron warships in the mid-19th century. Naval dockyards like Chatham were transformed into a new industrial hell, with workers suffering terrible injuries, but did their experience also lead to the birth of one of our most famous institutions, the National Health Service? The iron-clad ships were so vital to the British Empire that the men who built them were given special privileges, including free health care, which were normally enjoyed only by the very rich. But was this elaborate system of benefits introduced in the Royal Navy's dockyards a precursor to the modern welfare state that emerged a century later?

On the tiny Scottish island of Tiree, Dick Strawbridge reveals a remarkable story from World War II of how the timing of the D-Day landings was determined by the heroism of RAF weather forecasters, flying hazardous missions far out into the storms of the Atlantic. As their vital missions routinely took them head-on into storms that would have grounded all other flights, many aircraft crews were lost and their bodies never recovered. Dick meets one of these veteran flyers to discover how they managed to fly just feet above raging seas, with lightning striking the aircraft itself, in an attempt to find a break in the weather that would give the troops on the beaches of Normandy a fighting chance.

And off the island of Alderney in the Channel Islands, zoologist and former soldier Andy Torbet goes in search of a seabird that is famed in folklore as the harbinger of foul weather - the rare and elusive storm petrel. These feathered little forecasters are astonishing, hardy creatures that spend almost their entire lives far out at sea. Fishermen call them Mother Carey's chickens, but will they come home to roost for Andy?

The Hidden History of Harbours—Series 7

The Riddle of the Tides—Series 7