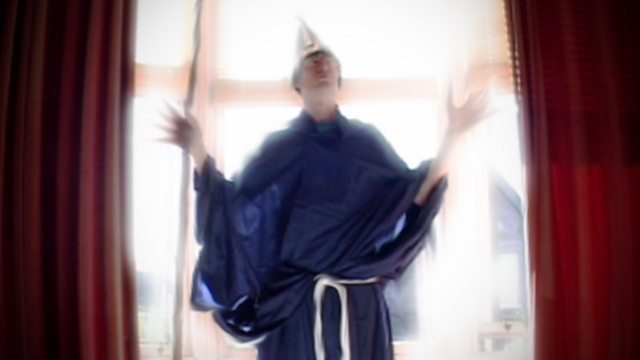 The End of the World Is Nigh

4 Extra Debut. The 2000 year old wizard living in the modern world has an Earth-bound meteor to deal with. Stars David Kay. From August 2011.

Step into the magically mundane world that is the life of 21st Century Wizard Mordrin McDonald. An isolated 2000 year-old Scottish sorcerer with enough power in his small finger to destroy a town, yet insufficient clout to get a speed bump installed outside his cave by the local council. Even for such a skilful sorcerer, modern life is rubbish!

In this episode, Mordrin (David Kay) is enlisted by fellow wizard Bernard The Blue (Jack Docherty) to help tackle a fiery meteor which is heading straight to earth and is threatening to wipe out all civilisation. However, Mordrin's attention is swayed from the task in hand by news that Heather has a new boyfriend in the shape of slimy patter merchant Aiden. (Donald Pirie). Will Mordrin be able to be distracted long enough from aiming pot shots at Aiden to save the world from certain doom?

Mordrin is deadpan, dry and makes delicious jams. He initially set up his jam-making business Fruity Potions as a plc for income tax relief, but has found it a useful vehicle to help him bolster his skill set and his range of products and services. (Even a wizard has to diversify these days.) He's been running Fruity Potions from his cave for the past few years, in between completing the odd quest as instructed by the Wizard Council. In the past, his services were to help kings in battles of good and evil, or as he prefers to put it 'assisting with neighbour disputes'. Now it can range from killing the odd Jakonty Dragon to an array of end of the world-type scenarios.