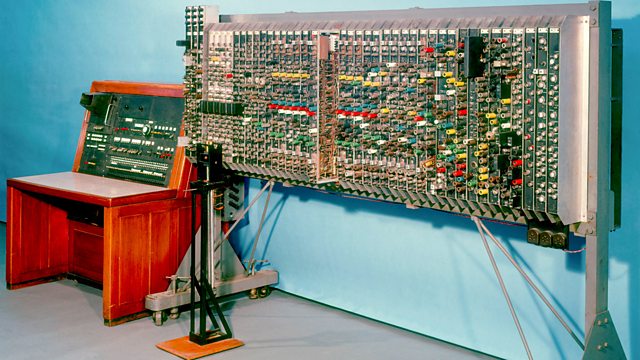 4 Extra Debut. The role of mathematician and Second World War codebreaker Alan Turing in inventing the computer. With Matt Parker. From June 2012.

Alan Turing, born June 23 1912, is famous for his key role in breaking German codes in World War 2. But for mathematicians, his greatest work was on the invention of the computer.

Alan Turing's brilliance at maths was spectacular. Aged 22, just a year after his graduation, he was elected a fellow of King's College Cambridge. And it was just a year after that, that he turned his attention to problems in the foundations of mathematics and ended up showing that a simple machine, set up to read and write numbers and to run a few basic functions, could in principle do all the things that are do-able in mathematics. His 'universal' machine was just a concept - a paper tape that could be read, interpreted and acted on robotically. But the concept was profound.

World War II shortly afterwards took Turing's talents into other directions, but even while designing machines at Bletchley Park to break the German Enigma codes, he was wondering how much more a computing machine might do - play chess for example.

And although the war work might have delayed Turing's academic work, it greatly accelerated progress in electronics, so that in 1945 he returned to his first love, creating a complete design for what he expected to be the world's first fully programmable computer, the National Physical Laboratory's ACE - the Automatic Computing Engine. In the end, beset by hesitation and bureaucratic delays, the ACE was overtaken by a rival team in Manchester, whose Small Scale Experimental Machine first ran on June 21 1948. But the Manchester Baby, as it became known, fulfilled the requirements laid down in Turing's seminal 1936 paper, and in a handful of instructions had the power to do any kind of maths, or data processing, like a computer of today does.

Turing soon joined the Manchester team, and again with remarkable prescience started work on artificial intelligence, wondering whether electronic machines could programmed not just to do maths, but to think in the way human minds do - a hot topic of debate even now.

Those explorations were cut short by his suicide in 1954, following prosecution for his homosexuality. His death at a time when official secrecy still hid his code-breaking work, and when the history of computing was already being written meant that few appreciated his central role in today's dominant industry. But some enthusiasts hope they can write him back in where he belongs.