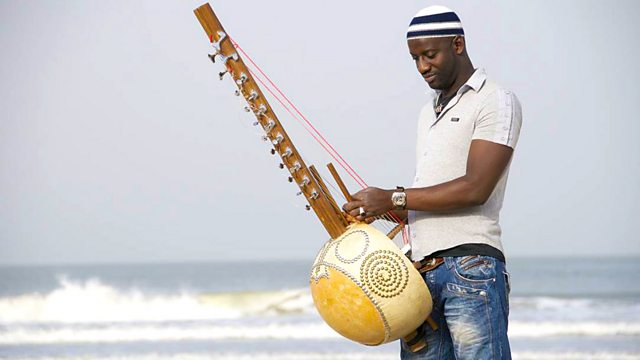 How are modern musicians re-imagining the role of the West African griot?

Traditionally griots belong to particular West African families who act as oral historians, advisors, story-tellers and musicians for their culture. Now a generation of artists living in the West, who have African roots, are learning musical techniques from the masters but creating songs and stories with contemporary relevance.

In a programme rich in musical sounds and poetic storytelling, writer Gaylene Gould explores what it means to be a griot today. When modern culture uses the term as a shorthand - what does it mean to call someone a griot?

Hereditary griot Seckou Keita, leads a music workshop at a primary school, teaching harp-like instrument the Kora. At the age of 10, Tunde Jegede travelled from England to Gambia to train with a master kora player. He now collaborates with both orchestras and the hip-hop artist HKB FiNN - who has changed the way he approaches writing lyrics and embraced the griot label. Sona Jobarteh, Tunde's sister, is a hereditary griot. She gives Gaylene a lesson in kora playing and discusses how her sex affects the role and why she is reluctant to call herself a griot.

Award winning poet and performer Inua Ellams has been performing at the National Theatre and Malian musician Fatoumata Diawara sells out gigs internationally- both are called griot by their fans but aren't entirely comfortable with the label. Fatoumata believes she couldn't address topics like female circumcision as a griot. London based spoken word artist Zena Edwards explains why she wants to honour the tradition.

Reflecting on the importance of the tradition in its purest form, Tunde Jedege says "every time a griot dies it's like a library burning down."