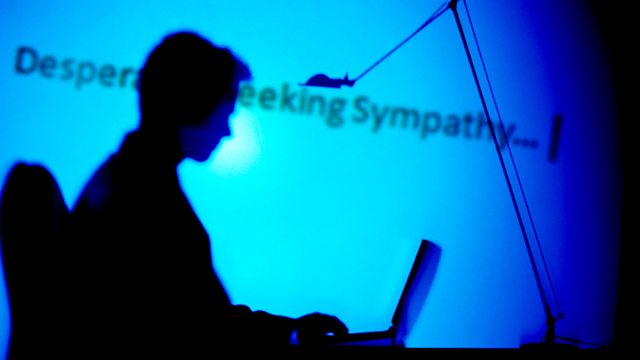 Why would a perfectly healthy person pretend they had cancer? Jolyon Jenkins investigates how online medical forums have been devastated by fakery, and talks to perpetrators.

Why would a perfectly healthy person pretend they had cancer? Or pretend that were pregnant with a foetus that could not survive long after birth? Munchausen's disorder has been known about for years but it's spread to the internet. People are constructing elaborate false identities, faking medical misfortunes and then posting online support forums. Few forums have escaped the imposters in what has become an epidemic of fakery.

In this programme Jolyon Jenkins speaks to those who have fallen victims of this kind of deception, as well as tracking down those who have perpetrated it. He learns how people who have genuinely suffered from medical misfortunes go online to offer help to other sufferers, only to find themselves taken for a ride by fakers. For some, learning that they have been getting into a deep and personal relationship with someone who turns out to be an emotional fraudster, is traumatic. Entire online communities sometimes feel devastated to learn that they have been harbouring an imposter.

The deception is often highly elaborate. "Munchausens by Internet" sufferers often invent multiple online personalities (known as "sock puppets"): to support each other husbands, boyfriends, relatives and friends who pop up to validate the main character. In one case, the Macmillan cancer forum was hoaxed by a teenage girl who posed as the mother of a young girl, "Charly", with terminal cancer. Members of the forum were gripped for months as the Charly's fortunes rose and fell. Eventually she lost her brave fight against cancer; forum members painted their nails pink in tribute to Charly's alleged last wishes and others wrote poetry in her memory. When it turned out that Charly was completely fictional, Macmillan forum members, many of whom had cancer themselves, were stunned. Some still refused to believe they had been corresponding with a teenager.

Imposters are not always detected but when they are they usually disappear without a word. Sometimes they reappear later under different names, but tracking down the real person behind the fake is virtually impossible. Why do they do it? Not for money. In interviews with two sufferers, Jolyon Jenkins hears of their desperate need for attention, their feelings of inadequacy in real life, and of loveless childhoods.

Other questions are raised by the phenomenon: why are people prepared to offer 24 hour support to characters who they don't know, and whose very existence they take on trust? And given the psychological damage done by perpetrators, shouldn't forum owners take more care to check that they are not providing a home for this new kind of online fraud?