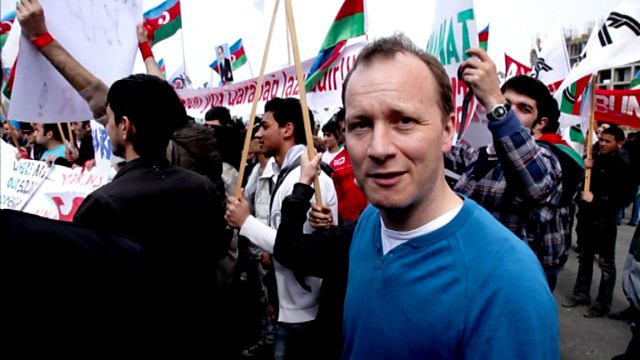 Panorama goes undercover inside Eurovision host nation Azerbaijan to reveal the truth about this secretive country and its approach to the world's most watched non-sporting event.

Panorama goes undercover inside Azerbaijan, the host country of the 2012 Eurovision Song Contest, to discover the extraordinary truth about this secretive country and its approach to the world's most watched non-sporting event.

Reporter Paul Kenyon finds out how the contest has been used as a tool of intimidation: viewers have been interrogated for voting for the nation's long-term enemy, Armenia; a protest singer has been told to flee before Eurovision or he will be thrown in jail; and dozens have had their homes bulldozed to make way for the Eurovision event itself.

The US embassy in Baku has compared the ruling family to the Mafia. The regime has held onto power through a combination of rigged elections, jailing opponents, and by irregular control of the country's vast oil wealth. So, why did the organisers of the world's best-loved music event agree to host it in Azerbaijan?

The Truth About Tax

The demolition of homes in Azerbaijan to make way for the Eurovision venue has been compared to London clearing land for the Olympics by the head of the song contest.