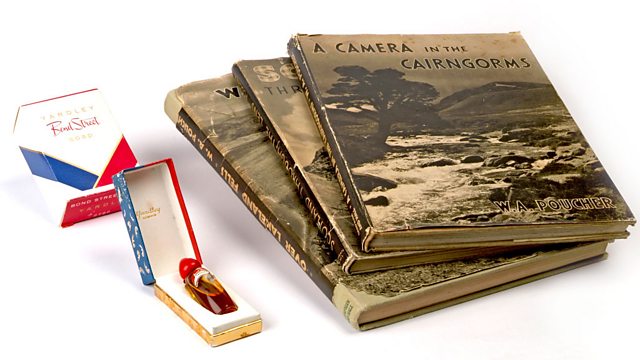 Poucher invented the perfume 'Bond Street' and also wrote upland guidebooks. He was a pioneer of mountain photography from the 1930s onwards and devised guidebooks that used photos to help hillwalkers and climbers. But he had a second life as well - in 1923 he had published a three volume handbook on perfumes and cosmetics that remains in print and, working for the perfumers Yardley, he invented one of their signature smells, the perfume Bond Street. These unlikely twin lives came together when he field tested his fragrances and make-up across the hills and fells of Britain. Sweaty mountaineers were not quite sure what to make of Walter but he resolutely and happily continued to mix his two lives and interests. In a celebrated moment of TV history in 1980 the pop singer Grace Jones attacked the chat show host Russell Harty live on air, the other guest on camera at the time was a befuddled looking Walter Poucher.

Yet when it came to staging and managing your life Walter perhaps was ahead of the game and knew things that would have surprised both Grace Jones and Russell Harty. Here was a metrosexual man decades before he was supposed to have evolved. Hayden Lorimer, geographer at Glasgow University and committed hill-runner, explores the life and times of the Perfumed Mountaineer.