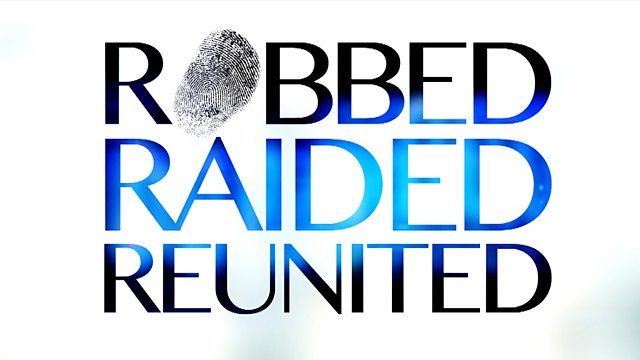 Series looking at burglary - its culprits, its victims and the police. In this episode, a widow is burgled and finds that her late husband's treasured possessions have been taken.

Robbed, Raided, Reunited is a series about a crime that can affect anyone and that happens every single minute in Britain - burglary. It features the dedicated policemen and women that stay one step ahead of the burglars, the victims who have had their lives turned upside down, and the villains who are tracked down and taken off the streets.

Alongside this are extraordinary stories of people reunited with their stolen possessions, from family heirlooms and precious jewellery to stolen Christmas presents and even pets.

In this episode, a widow is burgled and discovers some of her late husband's treasured possessions have been taken; police carry out a series of raids on the homes of people suspected of a number of local burglaries; and there is the incredible story of how police tracked down the stolen medals of one of Britain's most decorated firemen, and returned them to his family.