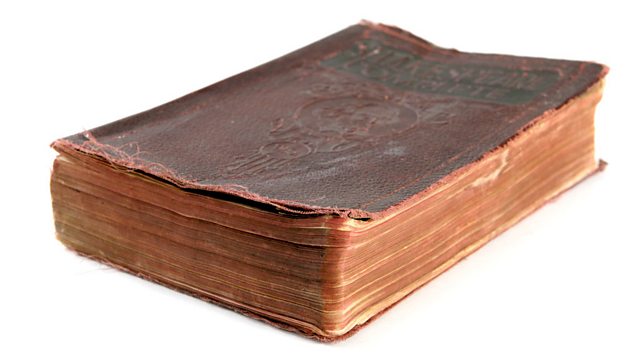 From the first folio to the 'Robben Island Bible', how Shakespeare became a global phenomenon. Neil MacGregor's object-inspired history of the Bard's world. From May 2012.

Neil MacGregor, former Director of the British Museum, brings to an end his object-based history. During the past four weeks he has taken artefacts from William Shakespeare's time and explored how Elizabethan and Jacobean playgoers made sense of the unstable and rapidly changing world in which they lived.

With old certainties shifting around them, in a time of political and religious unrest and economic expansion, Neil asked what the plays would have meant to the public when they were first performed. Carefully selected objects shed light on the great issues of the day that preoccupied the public and helped shape the works, and revealed much about the concerns and beliefs of Shakespearean England.

In this, the final programme of the series, Neil considers how William Shakespeare made the transition from successful playwright to possibly the greatest dramatist the world has known

Programme 20 SHAKESPEARE GOES GLOBAL - The publication of the First Folio of Shakespeare's collected plays in 1623 began the process of turning an early modern playwright into a global phenomenon. An annotated copy of the Collected Works of Shakespeare reveals the extent to which Shakespeare has inspired and influenced audiences across the globe and through the ages.

The Plays in Print

Made by: Collins (publisher)

In this series, we've been looking at Shakespeare's first audiences and the expanding, restless world they inhabited. Today we're looking at something very different: how Shakespeare's audience left the Globe and became the whole world.

The publication in 1623 of Mr William Shakespeare's Comedies, Histories, & Tragedies, more commonly referred to as the First Folio, meant that Shakespeare's plays were preserved for future generations. Over the last 400 years his words have travelled across continents and have been translated into hundreds of languages, speaking to all of us about our hopes, our fears and our dreams.

Today's programme looks at some of the many copies of Shakespeare's plays in existence today, and we speak to some of the people whose lives his words have touched.

More from Radio 4: The Ensemble

Melvyn Bragg discusses whether the work of William Shakespeare is indeed 'not of an age but for all time' or merely increasingly irrelevant museum pieces embalmed in out of reach language.

Melvyn Bragg discusses what we know about the life of William Shakespeare, a tantalising conundrum that has exercised minds since the day the playwright died.

Sue MacGregor reunites the core negotiators and key campaigners involved in the secret talks which ultimately led to the release of Nelson Mandela from prison in 1990.