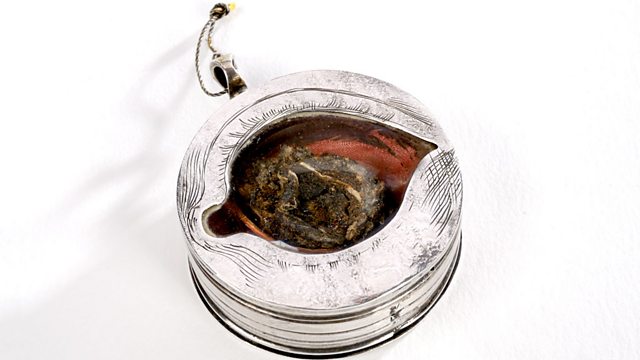 A human eyeball in a silver setting provides a striking insight into the theatre of cruelty in Elizabethan and Jacobean Britain. With Neil MacGregor. From May 2012.

Programme 19. THE THEATRES OF CRUELTY - A human eyeball in a silver setting provides a striking insight to the theatre of cruelty in Elizabethan and Jacobean Britain.

The most gruesome lines in Shakespeare are often not in the text itself, but in the stage directions. Numerous headless bodies are paraded on stage, limbs hacked off, tongues sliced out, eyes gouged from their sockets.

Shakespeare’s audience would have been familiar with the brutalities of torture. Traitors were hanged, cut down while still alive and their bodies hacked to pieces in front of blood-spattered crowds.

This relic was created after one Catholic member of such a crowd managed to grab the eye of Edward Oldcorne, a gentle Catholic priest executed in 1606. His eye is preserved in this delicate silver casing, and this gruesome relic serves as a spine chilling reminder that the gruesome scenes in King Lear, Titus Andronicus and beyond would have been disconcertingly close to the real deal.

This object is from Stonyhurst College

Watch a video of the Eye Relic

'Lest it see more, prevent it. Out, vile jelly! Where is thy lustre now?'

Justin Champion rifles through the popular murder pamphlets of the Elizabethan era to find out about serial killers, murderers and executioners.

Melvyn Bragg and guests discuss Foxe's Book of Martyrs, the celebrated sixteenth-century account of the suffering of Christian martyrs.

More from Radio 4: The Jesuits

Melvyn Bragg discusses the Jesuits and their role in the education, art, politics and mythology of the Counter-Reformation.