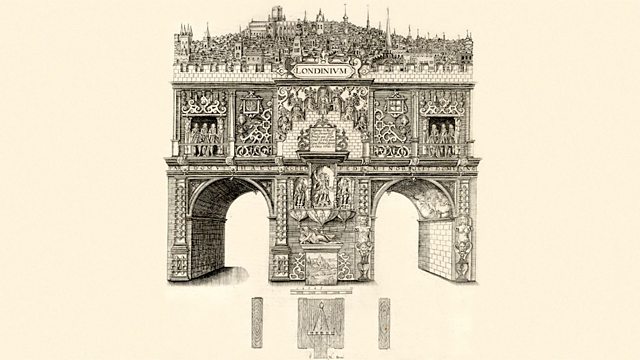 In his object-based history of Shakespeare's world, Neil MacGregor of the British Museum surveys the triumphal arches created for James I's entry into London in 1604. From May 2012.

Programme 18. LONDON BECOMES ROME - A set of designs for the Coronation Procession of James I reveals the extent of classical knowledge amongst Shakespeare's audience.

Made by: William Kip

On 15 March 1604, almost a year after he had been crowned, King James I's royal procession made its triumphal way through London. The intervening period had been marked by the great plague of 1603, but now, with the disease abated, the city was safe once again for crowds to gather.

And what a sight these crowds would see. Across the City of London, seven towering triumphal arches stood 90 feet above the peering crowds. Each one was highly decorated with adornments representing seven different regions of the world. Combined, these magnificent arches transformed London into ancient Rome, and King James I became its 'conquering Caesar', guaranteeing peace and prosperity.

Evidence of these elaborate and remarkable displays of street theatre survives in a book published in 1604 called The Arches of Triumph, a sort of souvenir guide of the day.

This object is from the British Museum

'But now behold, In the quick forge and working-house of thought, How London doth pour out her citizens: The Mayor and all his brethren in best sort, Like to the senators of th'antique Rome, With the plebeians swarming at their heels, Go forth and fetch their conquering Caesar in'

Melvyn Bragg and his guests discuss Cleopatra, the Egyptian pharaoh whose charisma, intelligence and beauty made her one of the most celebrated rulers of the ancient world.

More from Radio 4: Paganism in the Renaissance

Melvyn Bragg discusses paganism in the Renaissance and the return of classical pagan thought to Italy and then to the rest of Europe in the 15th century.

More from Radio 4: The Greek Myths

Melvyn Bragg discusses the Greek myths from Achilles to Zeus.