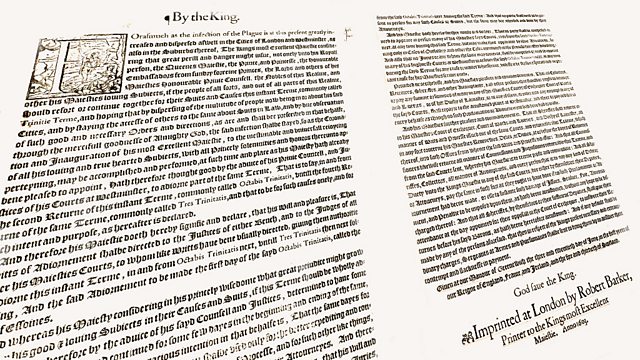 Neil MacGregor of the British Museum looks at how impact of the plague of 1603 as told through a series of early 17th-century proclamations. From May 2012.

Programme 17. PLAGUE & THE PLAYHOUSE - May 1603 saw not only a new king but the worst plague outbreak since the Black Death. Its impact and reach is told through a series of early seventeenth century proclamations.

A Time of Change, a Change of Time

Shakespeare’s life was marked by plague. His life started at the height of the first great Elizabethan outbreak in 1563-4, when the plague wiped out a quarter of the population of Stratford.

Later, when he was working in the theatres of London, the plague was to return once again and change the shape of his career. In 1603, a fresh epidemic swept through London forcing the theatres to close for almost a year and leaving Shakespeare’s company little choice but to head out on the road to tour the provinces.

Meanwhile, the newly-crowned King James I had to with establish himself as the head of a people who were more than a little bit suspicious of Elizabeth’s Scottish cousin, while also faced with impossible task of protecting the nation from the advancing threat of the vile and deadly plague.

This object is from the British Library

'I hear of none, but the new proclamation/That's clapped upon the court gate.'   Henry VIII, Act 1 Scene 3

More from Radio 4: Boils and Buboes

More from Radio 4: The Origins of Infectious Disease

Melvyn Bragg and his guests discuss the origins of infectious disease.

More from Radio 4: The Anatomical Renaissance

Thanks to a renaissance in anatomy in the 16th century, the art of surgery had been perfected in Bologna to the extent artificial but living noses, ears and lips could be supplied.