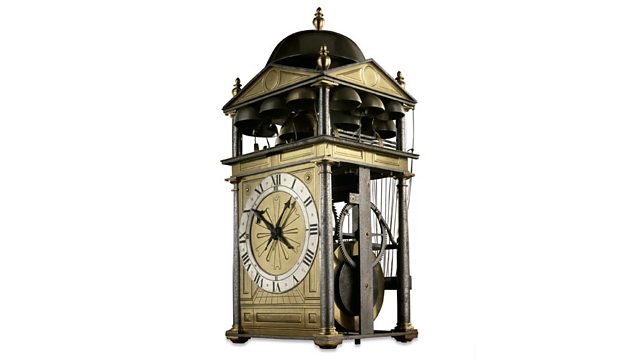 A Time of Change, a Change of Time

Neil MacGregor shows a musical striking clock. With a minute hand and quarter-hour chimes, it reveals the changing relationship Shakespeare's audiences had to time. From May 2012.

Neil MacGregor, former Director of the British Museum, enters the final week of his object-based history. Taking artefacts from William Shakespeare's time, he explores how Elizabethan and Jacobean playgoers made sense of the unstable and rapidly changing world in which they lived.

Programme 16 A TIME OF CHANGE, A CHANGE OF TIME - A rare domestic clock with an equally rare minute hand and quarter-hour chimes reveals the changing relationship Shakespeare's audiences had to time.

The Flag That Failed

Made by: Nicholas Vallin

Time hasn’t always moved as fast as it does in the 20th century. Of course, this isn’t true, but in today’s fast-paced world of constant communication, commuting and commitments, maybe it just feels like the clock is ticking faster.

The way we perceive and organise time is shaped to a large extent by our ability to measure it. Shakespeare’s audience would have been familiar with clocks and telling the time: there are over 80 references to clocks in his plays, making it clear to us that ‘Shakespearean’ time was well on its way to being modern time.

Public clocks, and increasingly private clocks like this one made in London in 1598, were used to orchestrate the workings of the city – and when the clock struck 2 o’clock, it was time to head to the theatre.

This object is from the British Museum

Watch a video of the Musical Clock

'Tis no less, I tell you, for the bawdy hand of the dial is now upon the prick of noon' Romeo and Juliet, Act 2 Scene 4 'For now hath time made me his numbering clock. My thoughts are minutes, and with sighs they jar'

More from Radio 4: The mechanical galleon

Neil MacGregor's world history explores the impact of the great age of European discovery between 1450 and 1600. Today he is with a magnificent clockwork galleon.

Melvyn Bragg examines the history of mankind’s attempt to understand the nature of time. Does it exist independently of our perception of it, or is it merely a figment of our imagination?

More from Radio 4: Ticking Over

Can the Isle of Man create a revival in watch making? Peter Day finds out if we can really bring back a British tradition.