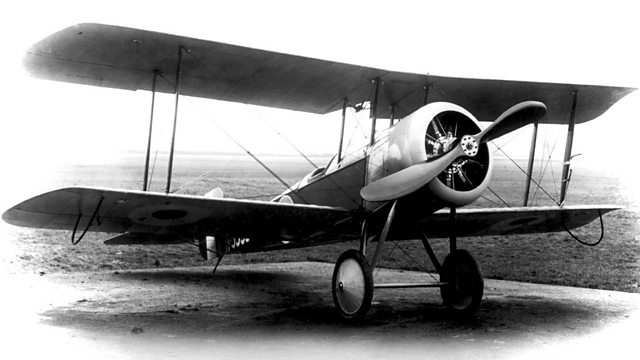 100 Years of the Royal Flying Corps

4 Extra Debut. Peter and Dan Snow explore how the Royal Flying Corps advanced from primitive balloons and flimsy biplanes to sophisticated long-range bombers. From May 2012.

After receiving its warrant from King George V, the Royal Flying Corps came into being in May 1912. Peter and Dan Snow look at the centenary of this corps of the British Army and how it advanced from primitive balloons and flimsy biplanes to sophisticated long range bombers.

Dan looks back on the experience of flying in a World War One trainer and Peter explores the aircraft of the Shuttleworth Collection, all working examples of trainers, fighters and bombers. Professor Richard Overy and General Sir Mike Jackson explain how the RFC's pioneering work altered the course of warfare, and documents from the Museum of Army Flying chart the tragic loss of life that went hand in glove with extreme bravery and remarkable technical development. In a few short years the RFC went from being perceived as a fad to a major component of 20th century warfare, and eye witness accounts tell of artillery spotting, photo reconnaissance and the carnage on the Somme.

More importantly, rather than focusing on the RFC as a curtain-raiser to the creation of the Royal Air Force in 1918, the programme looks at the Corps in its own right and what it brought in terms of intelligence, sophisticated mapping and air supremacy to the British Army in the field.